Posted on Thursday 19 March 2015 by Gareth Prior

London Tramlink services were suspended around the central Croydon loop over the weekend of 14th and 15th March as a start was made on the works to improve the landscape of the town centre with the “Connected Croydon” project. This was just the first of several weekend closures along with a much longer shutdown over Easter when no trams will run between Reeves Corner and East Croydon (extended to Sandilands for a period as well) for 17 days starting from 28th March.

As well as the general town centre improvement works London Tramlink are taking the chance to undertake some works of their own including some track relaying. In addition West Croydon tramstop is being improved which means that it currently has a rather bare feel with the shelters removed and temporary fencing erected. It is also planned that works will be undertake to improve the stop at East Croydon. 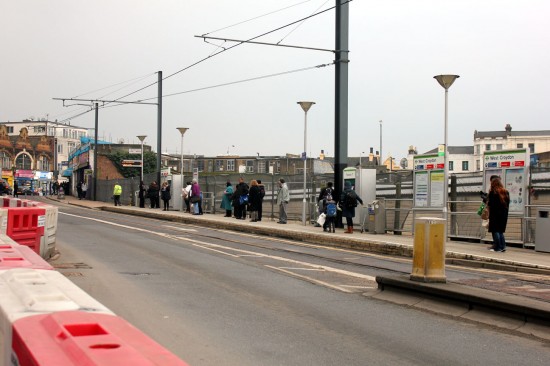 The scene on 16th March at the currently rather spartan West Croydon tramstop. Just visible in the foreground is works also underway on the bus station. (Photo by Ian Buck)