Liverpool 43 on the move again!

In order to free up space in the Pacific Road building at Birkenhead, the Merseyside Tramway Preservation Society’s beautifully restored horse tramcar Liverpool 43 has recently been returned to the main tram depot at Taylor Street. This means that, for the first time ever, three Liverpool trams are housed together in this building as 43 has now joined electric cars 245 and 762.

On Friday 6th March, Liverpool 43 was moved out of its long-term resting place and connected up to Hong Kong 69 which was called upon to tow the diminutive horse car back to Taylor Street depot. This had to be done carefully as 43‘s wheels are not up to an operational standard. Once it arrived, the horse tram was purposely derailed and moved to a side of the building, so that it could fit inside without affecting any of the other trams which reside there – this due to the fact that the depot is already rather full! This also means that 43 is now back on public display on a regular basis after a gap of several years.

It is not clear at the moment what the future holds for the Pacific Road building, which is set to be revamped with its indoor period street scene likely to be used as the basis of a new shopping complex. It had been expected that the horse tram would be allowed to stay put as an additional attraction, but its removal suggests that the building may soon be devoid of trams. The other long-term resident of this facility, Blackpool Brush Railcoach 626, is also likely to be removed at some point in the future although there is some doubt as to whether this tram is still up for sale or not. However, it seems certain that it will have to be removed in the fairly near future and that it will not become part of the operational tram fleet at Birkenhead. 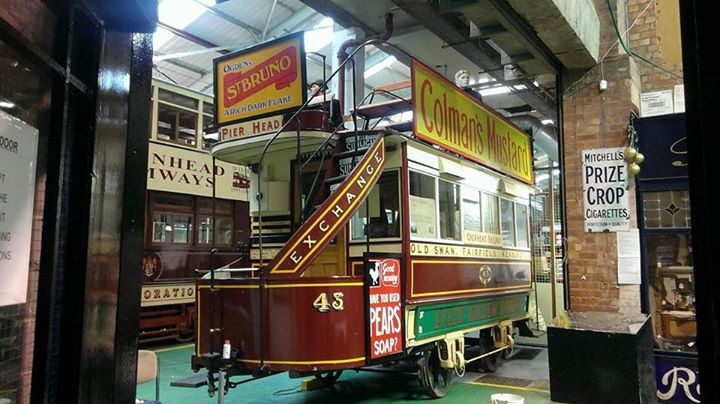 The wonderful Liverpool 43 seen in its new surroundings at the Taylor Street depot of the Birkenhead heritage tramway, where it is now on display to the public again on all open days. (Photo by John Hewitt)

1 Response to Liverpool 43 on the move again!