Posted on Sunday 1 March 2015 by Gareth Prior

Today for our “Picture in Time” series we head to South Yorkshire for an image from the Supertram system with a view of 1001 on test before the system had opened.

It is well known that the Siemens-Duewag built trams have all carried two different numbers in their careers in South Yorkshire: firstly a two digit number and then a three digit number when a 1 was added to their original numbers. But what is probably not known as widely is that initially some of the trams carried four digit numbers and as shown in this image one of these was the first of the class: 1001. Carrying the rather uninspiring original livery of two tone grey we see 1001 here passing Nunney Depot on a driver training run on 16th November 1993. This would be on the first stretch of Supertram line to open to the public on 21st March 1994. None of the trams ran in service carrying these four digit numbers with this particular tram becoming 01 until renumbering upon Stagecoach’s takeover to 101. 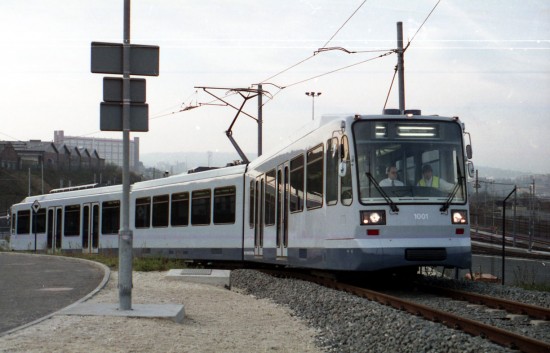