Posted on Sunday 1 February 2015 by Gareth Prior

This Tuesday (3rd February) will mark the first anniversary of the last run normal passenger runs of Manchester Metrolink’s original fleet of trams – the T68s. To mark the occasion (and also because I have been having a sort out of emails and photos sent through to us and found some images which haven’t been used!) over the next three days we be bringing you images taken by Lee Stanford of the trams on the Eccles branch, photos which show just how scenic areas of the Manchester Metrolink can be. Our first image features 1023.

New to Manchester on 18th March 1992, 1023 didn’t carry its first passengers until 11th May of the same year. Over the next 22 years the tram was used in service on a regular basis with a couple of periods out of service including one following a serious collision with a bus in the city centre. It also managed to reach East Didsbury terminus in September 2013 to undertake testing work in connection with modifications made to axle counters. It ran its final journeys on 21st January 2014 and remains at Trafford Depot. 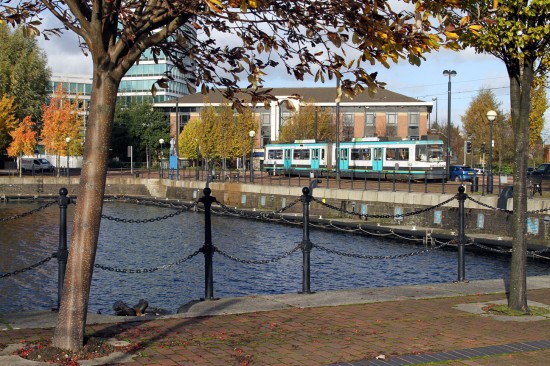 This photo shows 1023 across the water in Salford Quays on 23rd November 2013. (Photo by Lee Stanford)

This entry was posted in Manchester Metrolink, Scenic T68s. Bookmark the permalink.