Posted on Friday 30 January 2015 by Gareth Prior

Featuring for the second time in our “Picture in Time” series is Leeds 602. Last time we took a look at the tram we were in 1994 but our time machine has gone back to 1980 for this image as we see 602 working at the National Tramway Museum.

The story of the future of Leeds 602 was covered in much depth on this website last year but in 1980 the tram was operating for the last time in what would turn out to be seven years with workshop attention needed before it could return to use. 602 had seen fairly irregular use since arriving at Crich being used in service in 1967, 1972, 1975-6 and 1979-80.

Looking at this view of Leeds 602 it seems a rather bleak (or as the photographer puts it atmospheric!) day and at first glance this scene – outside what is now the main shop at the Museum – seems to have changed little in the intervening 35 years.

* We are planning on making this series “Picture in Time” a more regular feature during 2015 and are always looking for photos to include so if you have anything you would be willing to let us use please email gareth@britishtramsonline.co.uk. Without many contributions the series is likely to include a lot of views of Blackpool from the early 1990s onwards as that is where most of our “archive” comes from! 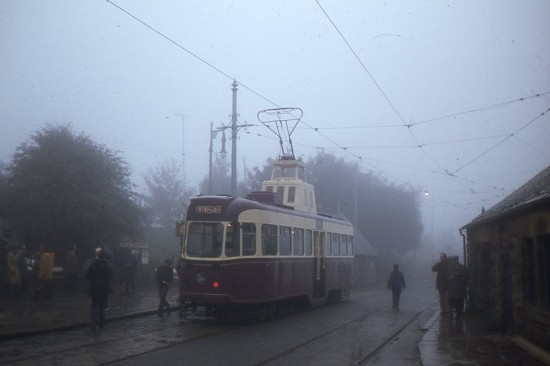