Welcome back to Centenary car 648!

Posted on Wednesday 30 May 2012 by Andrew Waddington

In a welcome move, Blackpool Transport have confirmed that Centenary car 648 will shortly be making a return to service as an extra car for use on their new heritage tram tours. Having last run on the final day of the 2011 season, it was at that time expected that none of the Centenary class would run in Blackpool again but this decision has now been reversed much quicker than anyone could have predicted back then.

Of course, 648 was originally intended for preservation at Crich, and was even overhauled with traditional features such as curved windscreens and a mock end grill in 2005 at the request of the Tramway Museum Society. However, with limited storage space the sad decision was made not to accept it for the national tram collection after all, leaving the car with an uncertain future. Several months ago, rumours first surfaced that the tram may be reinstated to service at Blackpool and now this has been confirmed. Apparently there have been a number of requests for the tram to run from enthusiasts, and so, proving that they are keen to please their customers, BTS have arranged for 648 to be commissioned. Due to its high steps, 648‘s relative youth will not help its cause as it wouldn’t be able to carry passengers in wheelchairs, and so the tram will be confined to use on heritage coastal tours. Whilst this might take some getting used to for a tram that was built in 1985, the car should provide some additional variety on these tours and whilst the general public may not find the propsect of paying a premium price to ride on 648 particularly appealing, enthusiasts will hopefully make up for this – especially those who had asked for it to run! 648‘s reactivation will also be useful on cold and wet days when the number of suitable heritage trams available is currently rather low.

Subject to the usual conditions, BTS have announced via the popular ‘Trams Today’ Facebook page – http://www.facebook.com/#!/pages/Trams-Today/144002195699684 – that 648 will return to use on Sunday 10th June. Hopefully by announcing this date early, anyone wanting to ride on the tram will be able to make sure they are present to give it a welcome reception. With Boat 604 also expected to be launched by the George Formby Society on Saturday 9th June, this will be an exciting weekend for Blackpool tram enthusiasts and hopefully the heritage trams will be well patronised on both days.

Incidentally, 648 will be keeping its attractive advert livery for the Hounds Hill shopping complex which was applied last year for now. However, if the heritage tours can turn enough profit then further investment in the tram fleet will be possible and perhaps soon, we will see a green and cream Centenary car running along Blackpool promenade for the first time since 1996. For now though, with no plans to operate any Centenary cars anywhere else for the forseeable future, the return of 648 will be another great event in what is shaping up to be a great year for traditional UK tramways. 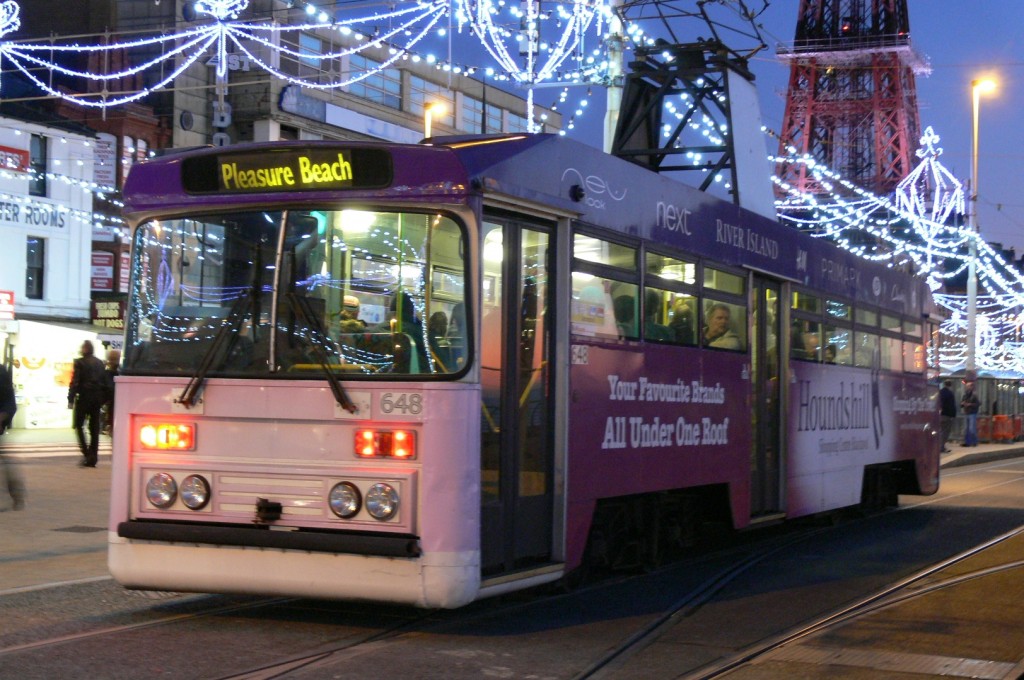 Centenary car 648 seen in service on what was supposed to be its last evening of service on the Blackpool tramway, passing through North Pier on Sunday 6th November. (Photo by Andrew Waddington)

7 Responses to Welcome back to Centenary car 648!