In Pictures: A Manchester tram at Briggate

Following on from its brief visit to Yorkshire to appear at a World War One centenary commemoration event earlier in the year, Manchester 173 made a second trip across the Pennines in early October, to participate in a second special event. This time the tram was taken to the heart of Leeds city centre for inclusion in an evening event entitled ‘Light Nights’, with its display organised by members of the Leeds Transport Historical Society.

In preparation for its latest adventure, Manchester 173 had recently been fitted with new towing brackets to assist with shunting movements, and also had its extensive decorations from the previous visit to Yorkshire removed. On October 2nd, the car was extracted from its normal resting place inside the Heaton Park Tramway’s Lakeside depot and was carefully towed to the opposite end of the tramway by Blackpool Vanguard 619. There, it was placed aboard a waiting low loader with some assistance from Manchester 765, before departing the park for the second time since arriving there last December. After staying the night at the hauliers’ yard, it was a very early start on 3rd October to get 173 to Leeds so that it could be prepared for the night’s event. With the tractor unit detached, the tram was displayed prominently in the city centre on its low loader, but with temporary barriers erected around it to deter anyone from attempting to board it – after all, 173 is in a partially restored condition and is therefore not really suitable for members of the public to explore! This was believed to have been the first appearance in Briggate by any tram since the Leeds system closed in 1959, and its attendance certainly attracted plenty of interest from curious local residents.

Internally, various equipment was installed inside the lower saloon enabling ghostly silhouettes of passengers in period costumes to be projected onto the windows of the tram, giving the impression that it was full of passengers and recreating a scene from a century ago. Temporary labels were also stuck over the side of the tram to disguise it as Leeds car, whilst the overall appearance was slightly spoilt by the ugly but necessary addition of protective sheeting over the open top deck. During the evening itself, when a range of buildings were basked in illuminations and projections as part of the ‘Light Night’, 173‘s presence was also used to promote the activities of the Heaton Park Tramway as a thank-you to the Manchester Transport Museum Society for making their tram available for the occasion.

Its night in the spotlight over, 173 was returned to Manchester the following day and is now back inside the Lakeside depot once again. It is now expected that 173‘s taste for travelling by road has been satisfied, and the tram will not be making any further journeys in its current state; indeed the next major development in its history should be the completion of a full restoration to operational condition, once the required resources to do this are available. In the meantime the car is safely housed at Heaton Park and of course remains potentially available for display at any future events staged at its home tramway. 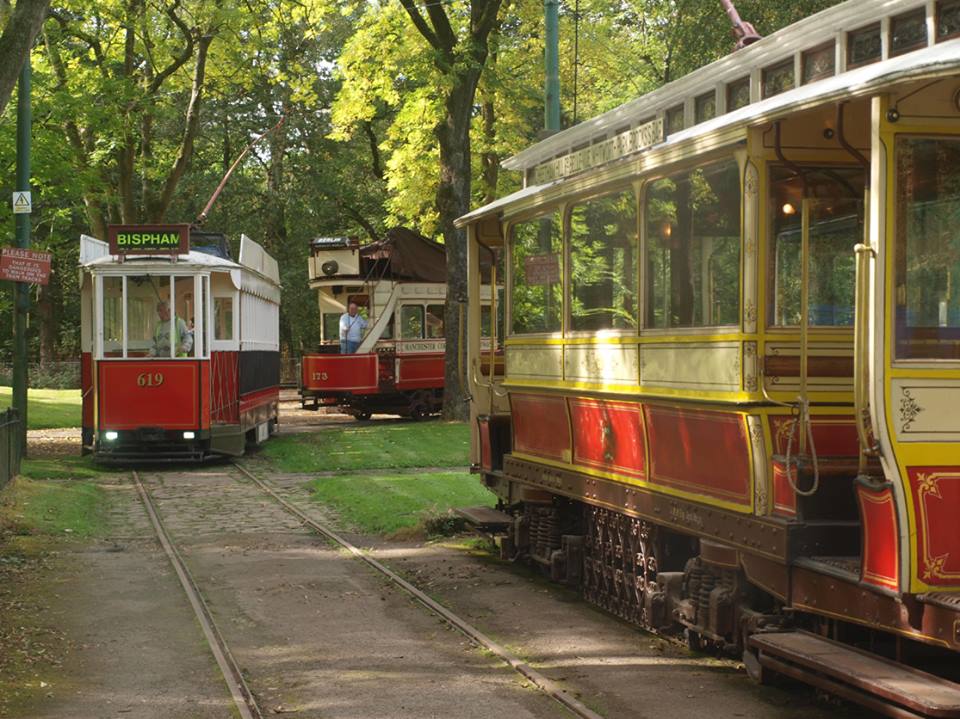 619 and 173 emerge through the trees en route to Middleton Road on 2nd October as Manchester 765 looks on. 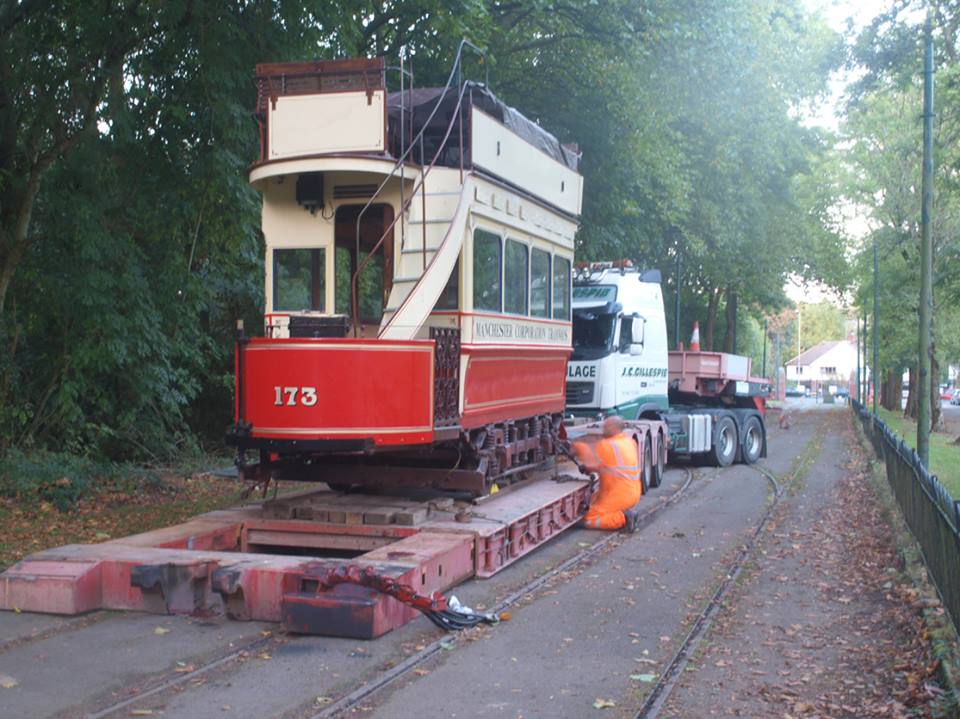 Manchester 173 is seen all loaded up and ready to set off from Heaton Park for its trip to Leeds. 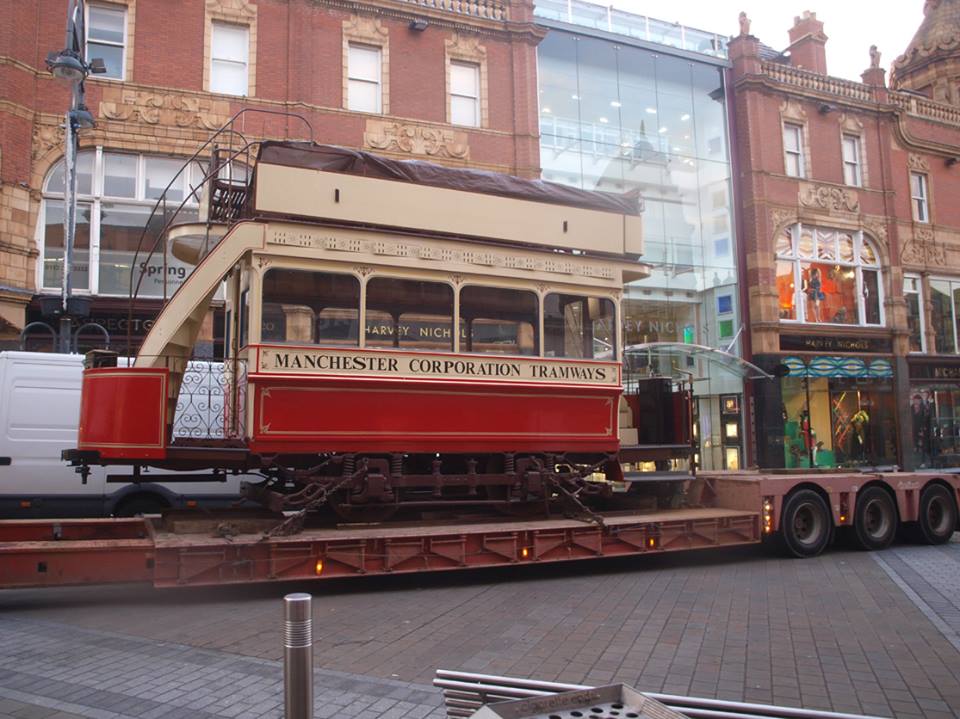 Arrival in Leeds for 173 as the tram is stabled in Briggate waiting to be maneuvered into the final position it would occupy for the evening event. 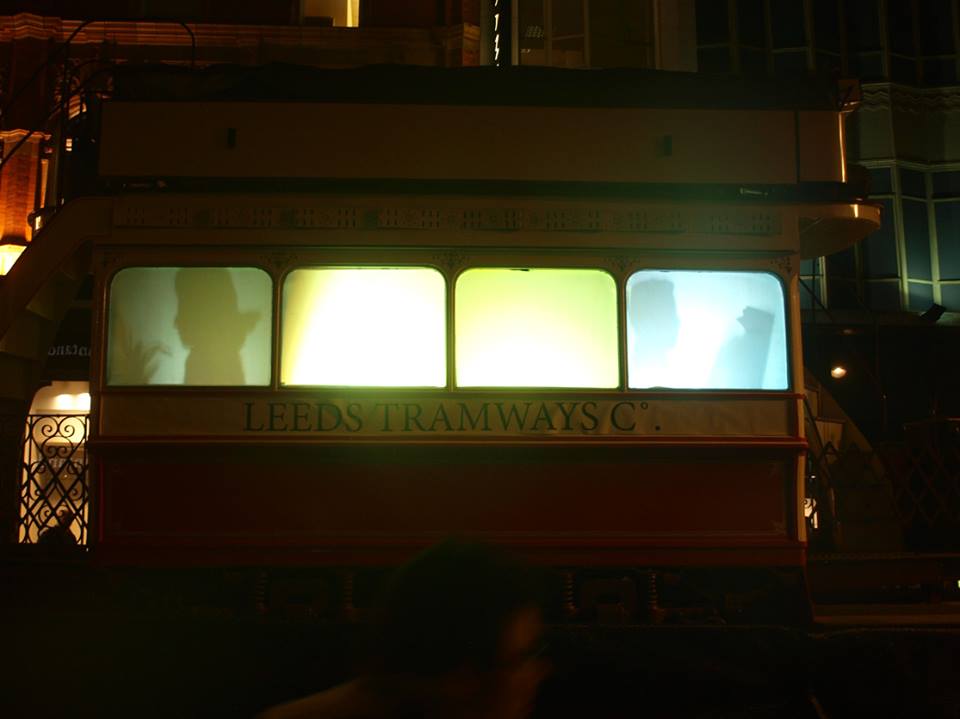 As night falls 173 is occupied by passengers - or at least that's what the projections make it look like! Note also the stuck-on Leeds lettering added to disguise 173's true identity. 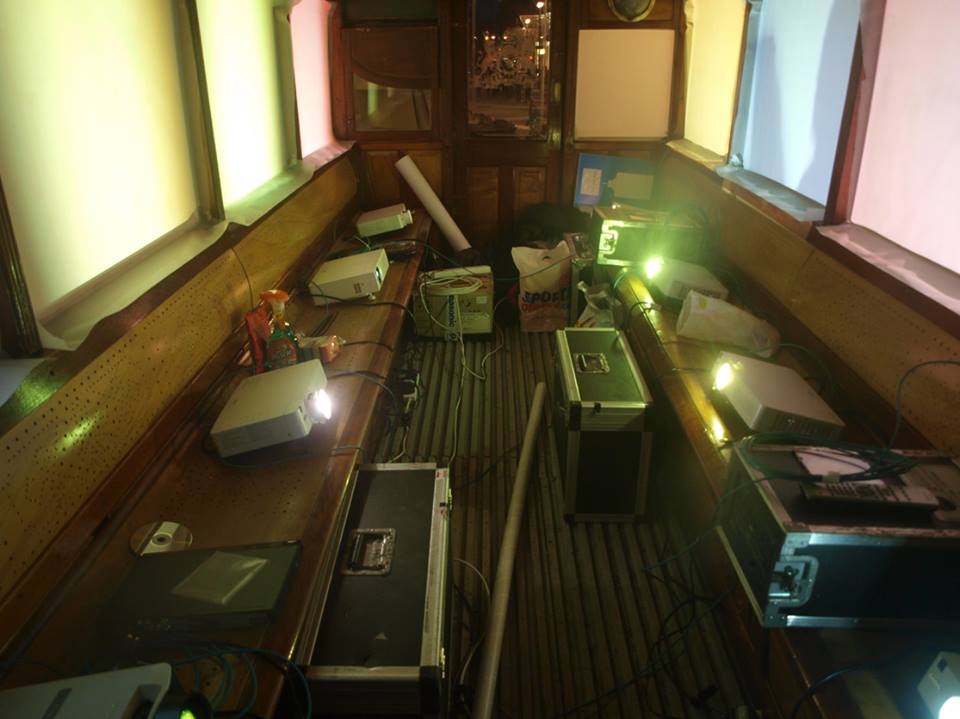 An internal view of the tram showing the projection equipment fitted inside the lower saloon. (All photos by Jamie Guest)