The Hovertram returns to England

One of Blackpool’s famous illuminated trams arrived at a new home on Tuesday 1st July, when the Hovertram 735 finally touched down on track at the home of the North East Land, Sea & Air Museum near Sunderland. It may be remembered that 735 was originally expected to arrive at this location almost two months earlier, but several delays have conspired against its new owners and meant that the tram remained in Scotland for several weeks longer than anticipated.

After spending several years in storage at Beith in Scotland, the Hovertram was sold to the North Eastern Electrical Traction Trust earlier this year. It had been planned to move it to the North East on the first weekend in May, but unfortunately the lorry that had been booked to move the tram broke down on the day of the move and so it has been left stranded for a few more weeks. However, on 30th June, Calkeld’s Heavy Haulage arrived at the shed where 735 has resided since leaving Blackpool back in 2007, to load the tram for its journey back to England. The car then made its road trip the same day, but had to wait until the following morning (and technically, the following month!) before being unloaded at its new home. The tram duly became the first double-deck tram to enter NEETT’s new depot at the North East Land, Sea & Air Museum and was stabled alongside the row of single-deck Blackpool trams; Brush car 634, Twin set 674+684 and Centenary car 647.

The transfer of the two Blackpool Balloon cars on site, 708 and 721, has been delayed due to some issues with the height of the depot doors although this should hopefully soon be rectified so that neither tram has to endure another winter out in the cold. 735 was able to fit inside the shed as it is, due to its roof being slightly lower – a design feature so that two large replica engines could be fitted to the top of the car (these are currently detached but have been moved with the tram).

The purchase of this Blackpool icon would not have been possible without the enthusiasm of NEETT volunteers who have been determined to give this tram a brighter future, and the expert hauliers also deserve full credit for completing a tricky move with great efficiency. The cost of acquiring and transporting 735 was largely supported by some local businesses and Andrew Waddington, on behalf of British Trams Online, has also made a small financial contribution towards the public appeal for donations. Sadly this splendid tram has fallen into a poor state of disrepair since it last carried passengers back in 2001, with several holes in the body panels and a general air of neglect, whilst it is also known that its wiring is in a very poor condition. Hopefully as time and funding allow, the Hovertram can be restored to a more presentable appearance, and perhaps even be made operational again, but in the short term it is excellent that such a unique and popular vehicle is now on public display and can be admired for the first time in over a decade. 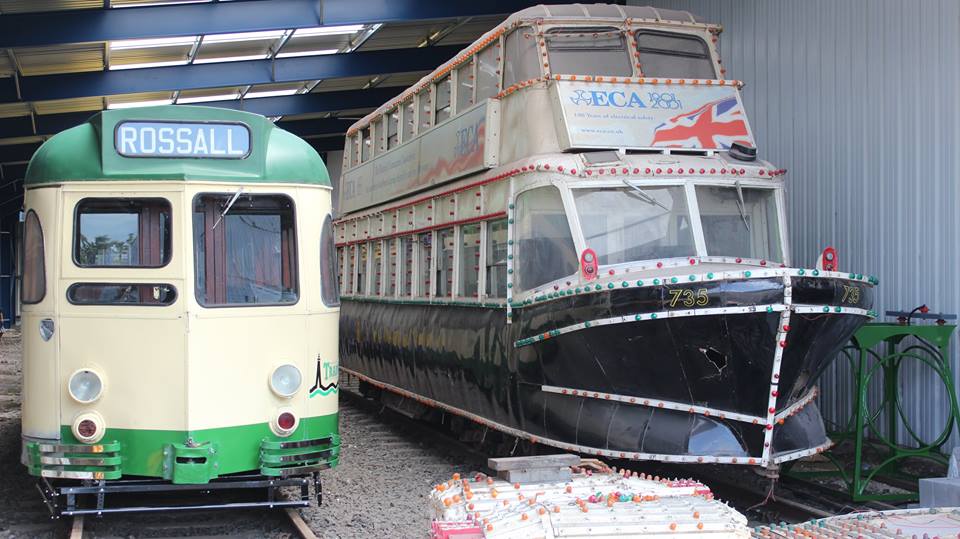 A superb photo of 'Hovertram' 735 safely inside its new home at the North East Land, Sea & Air Museum. The tram is pictured at the front of the depot alongside fellow Blackpool tram, Brush Railcoach 634. (Photo courtesy of the North Eastern Electrical Traction Trust)

1 Response to The Hovertram returns to England