Posted on Saturday 22 March 2014 by Gareth Prior

Nottingham Express Transit Incentro 208 has finally received standard fleet livery having been operating in a plain red livery since December 2013 following the removal of its all over advert for e-on. The tram was seen operating in fleet livery on 17th March having been through the workshops for its full refurbishment. This now means that there are five of the 15 strong class of Incentro trams running in non-standard liveries: 201 (Nottingham Contemporary ad), 206 (e-on ad), 207 (purple), 209 (Interski ad), 211 (Alstom ad). 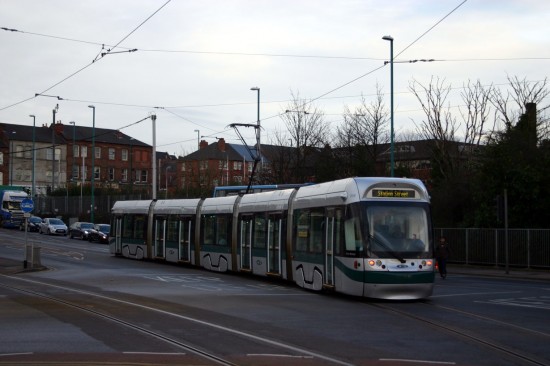 208 has just departed Wilkinson Street as it shows off its new colours on 17th March 2014. (Photo: Gareth Prior)