Surprising news from Crich Tramway Village involves arguably one of the most undervalued trams on display at Crich, which has recently moved into the workshop to receive its first significant attention since joining the national tram collection. The tram in question is Edinburgh 35, which is set to receive some work to improve its slightly shabby external appearance.

Unfortunately, there are no plans to carry out the major structural work on Edinburgh 35 that the tram requires to enable it to carry passengers again. However, after spending most of its time at Crich tucked away at the back of the running sheds where it has been slowly decaying since its arrival in the late 1980s, it is now set to enjoy an upturn in its fortunes. 35 is now scheduled to receive a total repaint over the winter, which will restore its attractive maroon and white livery to a pristine appearance and should also remove the unauthentic British Gas adverts applied for the car’s stint of service at the Glasgow Garden Festival in 1988; its last period of intensive operation to date. The car is then expected to be transferred into the Exhibition Hall for static display within the ‘Century of Trams’ exhibition, in the place formerly occupied by London Transport 1. This will in turn allow Liverpool 869, temporarily displayed there, to move back into the main depots, hopefully allowing it to be overhauled for further use before too long. Although 35 dates from 1948, meaning that it will be slightly out of place being positioned in the 1930s area of the static exhibition, it is pleasing that the museum’s only representative of the Scottish capital city will be more prominently displayed, and the work being carried out now should help to preserve it for many years to come. It is also very appropriate that the tram is receiving some well-deserved attention as Edinburgh is in the limelight, thanks to the anticipated opening of the city’s brand new tram system in 2014. 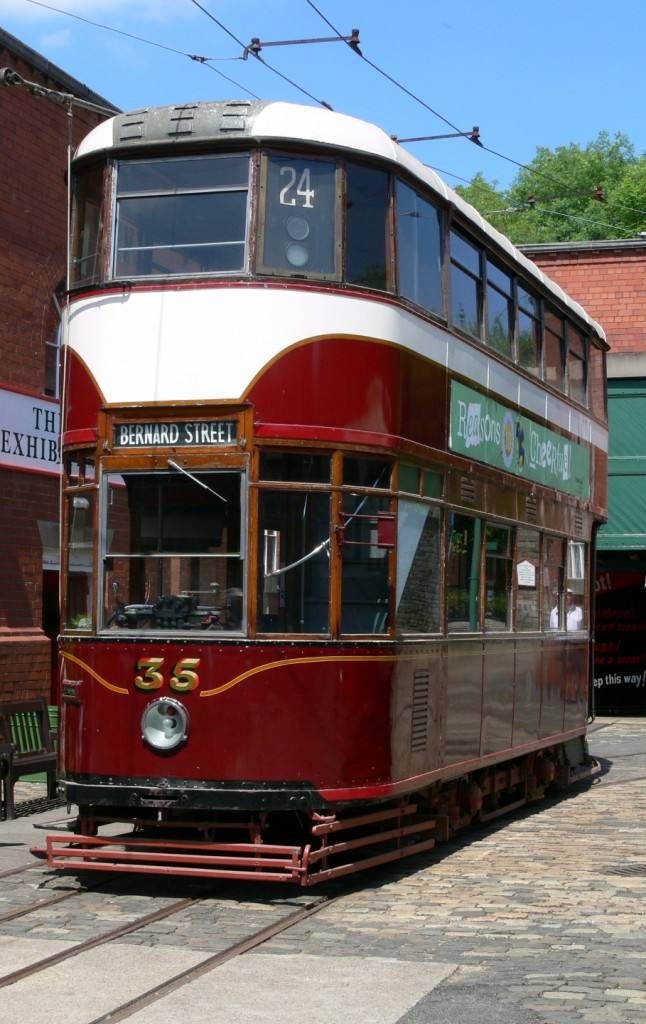 One of Edinburgh 35's last outdoor appearances in its current condition was during the 'Capital Weekend' in July 2013, when the car was photographed in the depot yard in glorious sunshine. (Photo by Andrew Waddington)

1 Response to Cosmetic attention for Edinburgh 35