The Balloons are back!

The school half-term holidays at the end of October traditionally mark the busiest period of the year for the Blackpool tramway, as many families flock to the seaside to see the illuminations. Last year, this was reflected by Blackpool Transport’s decision to use modified Balloon cars in normal passenger service, and this was repeated for 2013 – although disappointingly it is expected that these trams will only run for two days.

Thus, on Saturday 26th October, ‘B Fleet’ cars 700 and 719 both left Rigby Road and were used in service for the first time in five months. 700 was actually a last minute substitute for sister car 711 which unfortunately failed before exiting the depot, meaning that this tram has still not run in ordinary service since being named ‘Ray Roberts’ during the summer. Due to a staff shortage just the two double deckers were used on this day, and both mostly ran between Pleasure Beach and either Bispham or Little Bispham. The requirement for only two cars meant that the use of those cars which retain expired all-over adverts could be avoided, with those painted in the new white and purple fleet colours selected instead. Unusually, Flexity 001 was also allocated to specials later on in the day, which included a few short workings between Pleasure Beach and North Pier, which is something of a break from tradition for a class of tram normally used on much longer journeys.

Sadly the day did not pass without incident, as car 719 was in trouble during the afternoon and was forced to return to Rigby Road. It is to the credit of the workshop staff that the tram was hastily repaired and returned to traffic, enabling it to complete its duty as planned. Both trams were back in depot before the illuminations were switched on, presumably so that some of the staff on board could transfer onto the evening’s tour trams after taking a well-deserved break. However, this meant that the specials had finished running for the day by the time the tramway as its busiest, leaving the core service trams to cope with exceptionally heavy loadings during the evening.

Further use of the ‘B Fleet’ is expected tomorrow (Sunday 27th October), which is likely to be their final appearance of 2013 unless a very late change of plan occurs. Whilst it is pleasing to see these cars being utilised on one of the busiest weekends of the year, it remains a source of some disappointment that the number of outings by each car this year can be counted on one hand. It is still hoped that a more serious role can be found for these trams, perhaps when/if the North Station branch line is built, although for now we must remind ourselves that at least the conversion work was not funded by Blackpool Transport, and that Blackpool Council had insisted on the alterations to several Balloon cars to enable their use on normal stage carriage duties rather than heritage tours.

Incidentally, last year’s October half-term saw the use of the rebuilt Balloons confined to weekdays only, whereas this year they have solely been used at weekends. Maybe 2014 will see them used across the whole week!? We can hope! 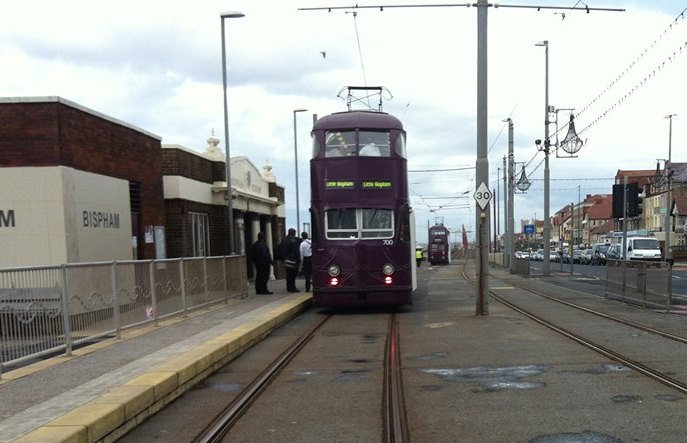 Both of the rebuilt Balloons used on 26th October meet up at Bispham. Car 700 is seen at the northbound platform en route to Little Bispham, whilst 719 pauses for a crew break on the centre track.

5 Responses to The Balloons are back!