Trams in the works at Crich

The major overhaul of Sheffield ‘Roberts’ car 510 continues to progress well, with the tram now largely painted in its ornate ‘Last Tram’ livery, although the lower body panels remain to be completed. In addition, new gears and pinions have been delivered to the museum and re-assembly of the refurbished truck continues, whilst a rebuilt controller was re-installed on July 27th. Unfortunately due to various delays, concerning various worn parts for which replacements proved difficult to obtain, it is looking increasingly doubtful that this tram will be back in service this year, but the sight of an immaculate 510 should still be well worth waiting for, and hopefully the major investment in this car by members of the Tramcar Sponsorship Organisation will ensure that it will see many more years of service.

As work on 510 enters its latter stages, the overhaul of LCC 106 is just beginning with the car having already been removed from its truck, allowing new gears to be put on order. Numerous body panels have been removed, revealing the framework beneath. Some of the body corner pillars have suffered from corrosion and will be replaced, although at least one is in good condition and will therefore be retained. Funding for this major project is being provided by the London County Council Tramways Trust.

Meanwhile, work on some of the museum’s latest acquisitions from Blackpool continues with Jubilee car 762 continuing to challenge the workshop team. However, the complex electrical work is now nearing completion, having been largely dealt with by one dedicated volunteer who has committed countless hours to the task of getting this tram back into running order. Brush Railcoach 630 has also occupied the workshop recently as it required a new resistance bank, which has now been fitted and the car has been road tested successfully. A spare pantograph held in stock was recently fitted to this car, with another pantograph now being overhauled to provide a back-up.

Finally, it’s good news for London United Tramways 159 which has settled down into regular use since being re-launched earlier this month. The tram has been proving very popular, and has now been moved into the main depots for ease of access, having previously been housed in Depot V which is only accessible via the traverser. Its place there has been taken by Blackpool ‘Standard’ 49 which has moved around numerous times in the last few years, contrasting with most of the static fleet which generally stay in the same place. 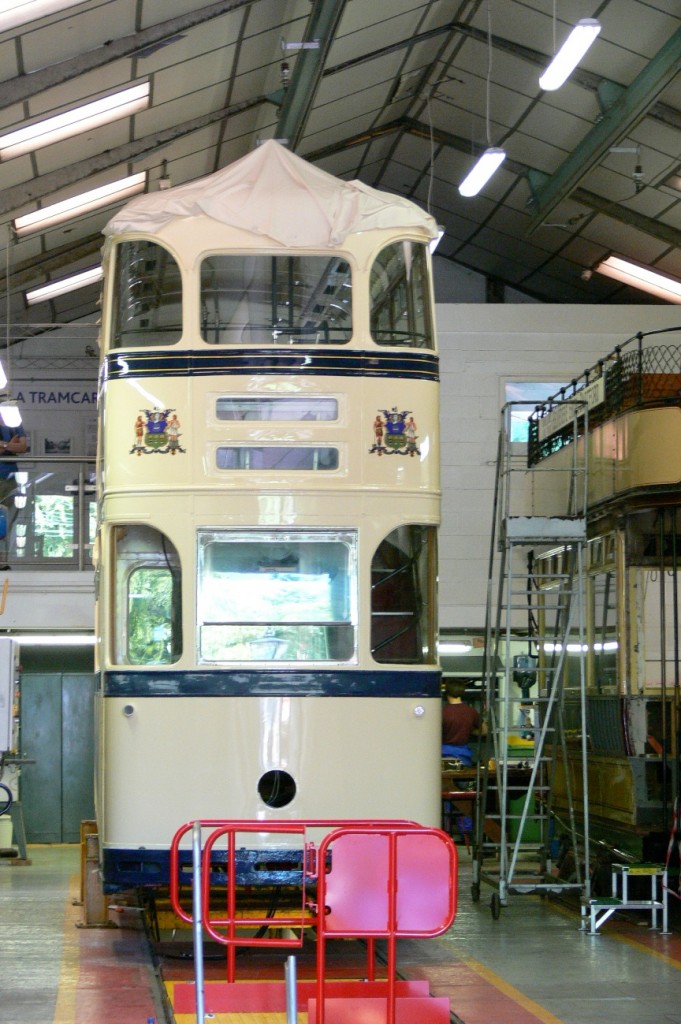 A recent view of Sheffield 510 in the workshop at Crich, showing the partially completed paintwork. Note the sheet draped over its roof to protect the fresh paintwork from dust and dirt. (Photo by Andrew Waddington)