Posted on Tuesday 12 April 2022 by Gareth Prior

We’re not sure how many mirrors Stagecoach Supertram have broken recently but it seems the bad luck keeps on coming with the past few days seeing more disruption – including the ongoing disruption on the Blue route to Halfway. In addition to those overhead problems there has been a signalling fault on Network Rail preventing the Tram-Train service to running to Rotherham Parkgate and to compound matters on Monday 11th April a Police Van collided with 121 on Middlewood Road.

We start off this article with the ongoing overhead problems. Originally reported as being in the Donetsk Way area which meant all Blue route services could only run Malin Bridge to Donetsk Way it later transpired that the problems were a bit further on along the line and so from Thursday 7th April the area where trams could operate was Malin Bridge to Beighton Drake House.

The latest update from Supertram on this issue was given on 7th April when it said the “temporary changes will remain in place until at least Monday 11th April”, but as we write this article on Tuesday 12th April the changes continue to be in effect with no word on when they may return the full length of the route to Halfway. Supertram passengers can use their tickets on the First and Stagecoach 120 bus between Crystal Peaks and Halfway. 118 remains stranded on the closed section of tramway.

Then Monday 11th April proved to be “another of those days”. First off a signal failure on Network Rail – caused by cable theft at Attercliffe – meant no Tram-Train services could run from Tinsley/Meadowhall South and Rotherham Parkgate. Services resumed from the 1727 departure from Cathedral and 1750 return.

Almost as soon as Supertram confirmed that those services would resume then a Police Van under blues and twos drove into the side of 121 on Middlewood Road. Dashcam footage posted online seems to show the Police Van going through a red light just as 121 was passing and with neither vehicle able to stop a collision ensued. Yellow route services were turned at Hillsborough from around 1740 until 2030 whilst the collision was cleared.

One Police Officer suffered a broken leg whilst another suffered minor injuries. There were also reports of a passenger on the tram being injured.

Both Police Van and tram suffered damage, although 121 was able to return to depot under its own power. 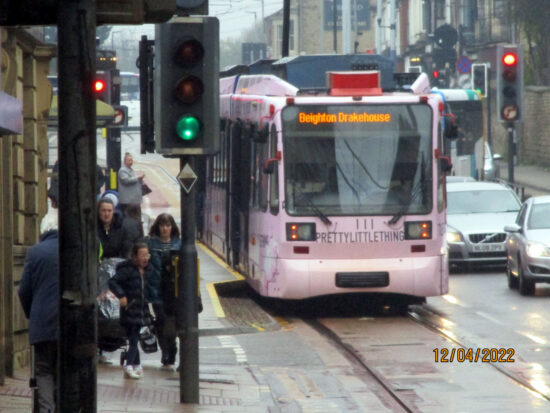 Whilst sister Pretty Little Thing 118 is stranded on the line to Halfway, 111 demonstrates for us the rare destination of Beighton Drakehouse. (Photograph by Stuart Cooke, 12th April 2022)