Posted on Monday 27 December 2021 by Gareth Prior

Its two for the price of one in today’s edition of “They Ran in 2021”! We take a trip to the East Anglia Transport Museum.

For a lot of 2021 there were only two trams available for service at the East Anglia Transport Museum (although that changed during December when London Transport 1858 was recommissioned for service). Those two trams were Amsterdam 474 – which itself was only returned to action during the year after works attention – and stalwart of the fleet, Blackpool Standard 159. On any normal operating day at Carlton Colville trams alternate in running up into the woods and they are joined in operating by a selection of trolleybuses – and not forgetting the East Suffolk Light Railway! 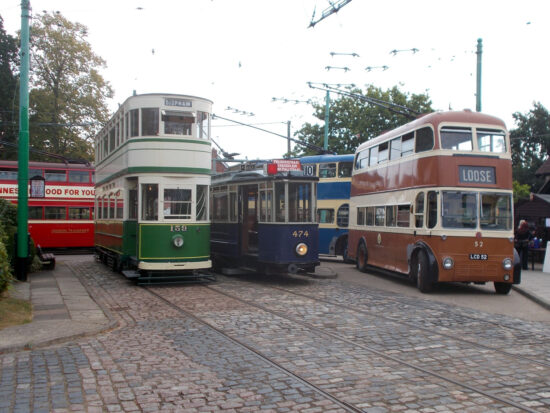 This photo was taken during the annual Trolleybus Weekend in September and shows both of the trams at the Chapel Road terminus. They are joined immediately to the right by Maidstone trolleybus no. 52 with a further two trolleybuses also seen in the image. (Photograph by Tim Major, 26th September 2021)