Posted on Friday 10 September 2021 by Gareth Prior

Today’s “Picture in Time” is again featuring the Blackpool Tramway as we head north to Fleetwood.

This photo was taken in early September 1976 and is on Fleetwood Esplanade at the Fleetwood Ferry terminus showing two trams which are getting ready to head back south. At the front is one of the iconic Balloons with the first of the production cars, no. 701. Starting off life as an open topper it was soon fully enclosed and would remain in service on its home tramway throughout the traditional tramway years and has now become part of the heritage fleet. With trolley in place, normal green and cream livery, Corporation crests and between deck adverts for Empire Pools the tram’s destination blind has already been set for a full length return journey to Starr Gate.

Just behind 701, is Brush Car 623 which unlike the double decker has yet to amend its destination blind with Fleetwood still proudly showing. The Brush Car is also in a green and cream livery along with Corporation crests and has roof advert boxes. These advert boxes feature different adverts with the back box featuring one for Marlboro. 623 is now preserved and can be found at the Heaton Park Tramway. 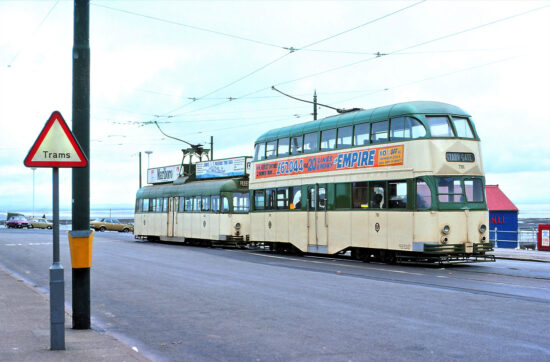