In Pictures: Trams to Newhaven project works at Picardy Place

Posted on Wednesday 8 September 2021 by Gareth Prior

When the Trams to Newhaven extension of Edinburgh Trams opens in the next couple of years the current terminus at York Place will be swept away and replaced by a new stop at Picardy Place – which will become the first new stop to be opened on the network since Edinburgh Gateway on 11th December 2016. In this pictorial update we take a look at recent progress here with more work expected to get underway in the coming months.

Picardy Place tram stop will be located on a traffic island which (although it has been redesigned several times since) replaced a triangular block of tenements which were demolished in 1969. This included the address where Arthur Conan Doyle, of Sherlock Holmes fame, was born in 1869. Plans for the new stop showing an island platform and a single platform on the south side.

SFN have now taken control of this worksite with the previous occupants, Laing O’Rourke, no longer requiring the base for their work in connection to the St James Quarter development. 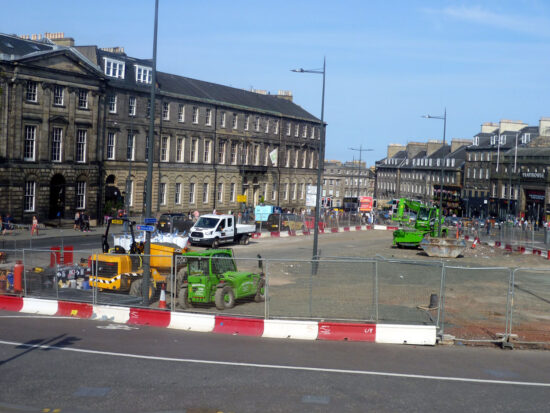 This photo is taken from the top deck of a passing Lothian Bus and is looking north along Leith Walk where trams will eventually run. The actual tram stop will be located between the line of the three lampposts and the fence behind the white van. The building on the right with the flagpoles is the Playhouse Theatre (which originally opened as a 3000 seat cinema in 1929) with Leith Walk running downhill in the distance. The current York Place terminus is out of sight to the left across Broughton Street junction. (Photograph by Roy Calderwood, 28th August 2021)