In Pictures: More progress on tracklaying in Edinburgh

Despite the fact that the official programme has shown that the Trams to Newhaven project is slightly behind schedule – although is still said to still be on target for completion by spring 2023 – our regular pictorial updates have shown that good progress is being made on the installation of tracks at various points along the line. In this latest update we take a look at tracklaying on Constitution Street. John Hampton with the picture.

One of the highest profiles sections of the tram extension has been that alongside South Leith Parish Church where a large medieval graveyard had to be exhumed with a team of Archaeologists on hand to ensure that everything was fully recorded and that things were done with respect. In total over 300 skeletons were discovered which are helping historians to discover more about the history of Leith. With the skeletons now removed attention has been able to turn towards the laying of track in this area. 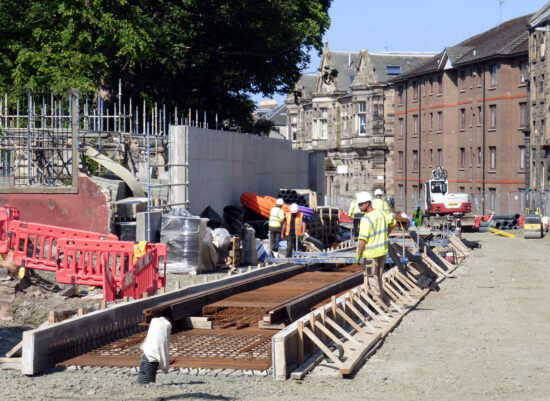 This section of Constitution Street is between Duke Street and Queen Charlotte Street and is immediately adjacent to South Leith Parish Church (on the left). The burial ground that was exhumed was now outside of the Church grounds as it had been used to surface Constitution Street with the bodies remaining under the road since this happened. The concrete wall on the left here is on the boundary of the present church yard and will eventually be faced with decorative work when completed. In this view we see the first sections of track here being laid. (Photograph by John Hampton)