Posted on Saturday 19 June 2021 by Gareth Prior

This latest edition of “Lockdown Walks” is again in Sheffield as we feature another of the original Siemens-Duewag built trams.

This time out we feature 120, and its “celebrity” livery. On countless occasions we have probably written how it received its livery for the 50th anniversary of the closure of Sheffield’s original tramway in 2010, but not this time as we’re sure you all know that already! 120 was delivered as 20 in May 1994 in the standard original fleet livery and has also carried three versions of Stagecoach livery (although the current version was carried briefly and it is probably the tram which has been in these colours for the least length of time) and two advert liveries over the past 31 years! 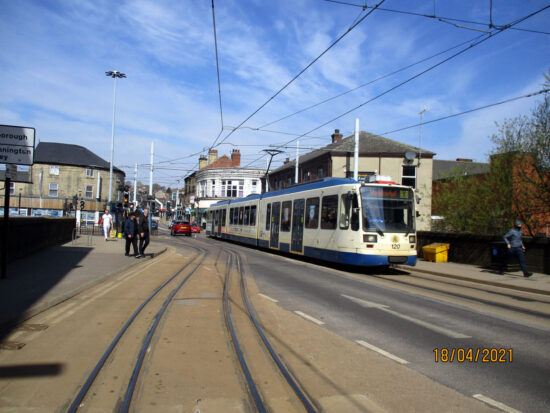 We see 120 here just arriving at Hillsborough when working on the Yellow route from Middlewood to Meadowhall. (Photograph by Stuart Cooke, 18th April 2021)