In Pictures: 37 returns to West Midlands Metro and 30 is back in service

Posted on Thursday 17 June 2021 by Gareth Prior

After spending eight months in Spain for repairs, West Midlands Metro Urbos3 tram 37 has returned to Wednesbury Depot. Looking almost as good as new – although where some of the repairs have taken place the West Midlands Metro livery vinyls haven’t been reapplied – the tram returned on Wednesday 15th June.

37 had left Wednesbury back on Friday 16th October 2020 with it transported back to CAF’s plant in Zaragoza. Its not known what happened to the tram meaning it needed significant repairs but it last operated in service sometime in summer 2020. Ahead of its move back to Spain much of the interior fittings had been removed either in an attempt to repair it in the UK or in preparation for the major work back in Spain.

The significant work in Spain has been concentrated on the body of 37 and this has resulted in the fitting of new exterior panelling – which have not received the West Midlands Metro blue vinyls, presumably this work will follow at the depot. Now its back it will need to have its interior fully refitted before recommissioning and a return to service.

And talking about a return to service, 30 is now back in use. This tram had been out of action for a number of months after a collision but after internal repairs were completed it was cleared for a well timed returned to service.

Services on the West Midlands Metro continue to only be running between Wolverhampton St George’s and Bull Street as repairs to those trams which were discovered to have the cracks in their underframes continue. Trams are only running every 10 minutes until 1900 after which the frequency reduces to every 15 minutes. 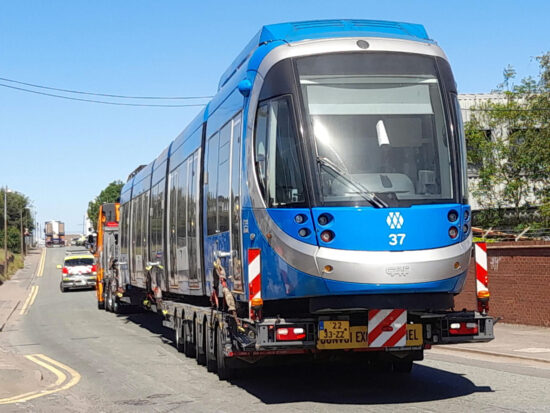 37 arrives back in the West Midlands having been transported across from Spain via Bristol. 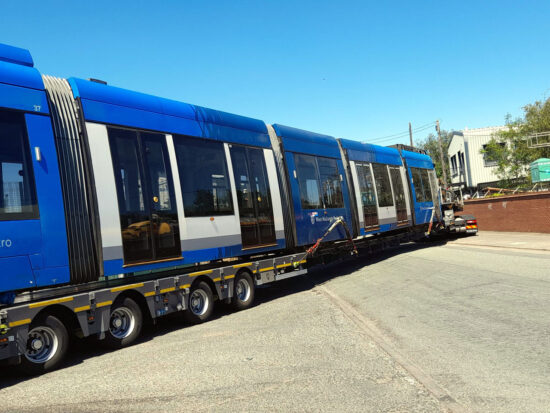 As it makes the steep turn we can see the new panelling without livery vinyls. (Photographs x2 by Dan Noon)

We take another look at 37 arriving back.

Side-on to 37 showing one end and a centre section.

The very centre section is in full livery still but those sections either side of it have had the new panels fitted as we see here.

A close-up of the tram chained to the low loader. (Photographs x4 by Andy Walters)