Its almost time for the talking to stop and the action to start! We’ve reported several times this year about how things have been reorganised at the Crich Tramway Village in preparation for the return of Blackpool Brush Railcoach 298 from Clay Cross so its restoration can be resumed and now the tram is back at the home of the National Tramway Museum to allow the next stage of work to get underway later this year.

Move day for 298 was Friday 11th June – with Friday’s now handy for tram moves at Crich with the museum being closed to the public – with Scotts contracted to conduct the move (as usual). 298 was collected from the Clay Cross store by the Scotts low loader and moved the relatively short distance to Crich with this move made easier by a recent reorganisation at the store to give decent access (this reorganisation included the movement of the North Metropolitan Horse Tram parts which will also be restored in the future).

After arriving at Crich the tram was unloaded on the mainline at Stephenson Place with the Blackpool Electric Locomotive then used to move 298 to the depot area. The Brush Car was not moved immediately to the Workshop as other major projects are continuing with it currently being stored at the rear of track 5 in the main depot. There it is surrounded by fellow Blackpool trams with Box 40, Pantograph 167 and Boat 236 usually on track 6 alongside with Brush 630 a usual track 5 resident. Its nearest neighbour on track 4 is Grimsby & Immingham 14.

During the shunt into the depot it met up with fellow Brush Car, 630, which was stabled on the depot fan to allow 298 to be put at the rear of the shed.

Work on 298 will start in earnest later this year and it will soon be joined by its new underframe which has been making excellent progress at the Ffestiniog Railway in Wales. When the underframe is transported across to Derbyshire it will be stabled on accommodation bogies with those from Blackpool 638 having recently returned from Beamish for this purpose.

298 had left Crich for Clay Cross on 11th July 2014 and now almost seven years later it is back at Crich with a far brighter future than when it left!

While its good news that Blackpool 298 has now returned to Crich on the other hand the collection at the museum is now down by one local tram with Derby 1 having to move in the opposite direction to create space for the streamlined Blackpool tram. As was announced earlier this year 1 was selected to depart after careful consideration by Crich of the options and it has now departed for Clay Cross – the first time that the Derby car hasn’t been on display at the museum since 1991. Hopefully, it won’t be too long before no. 1 is back on display once more. 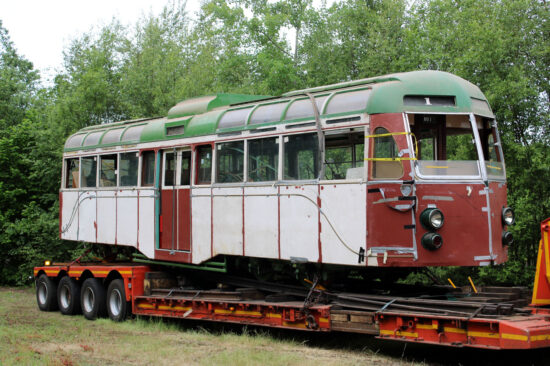 298 all loaded up and ready to depart from Clay Cross. 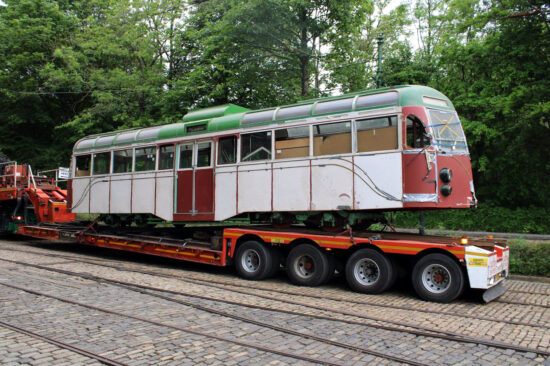 Back at Crich! 298 still on the low loader as it is driven along the cobbled museum street ready for unloading. 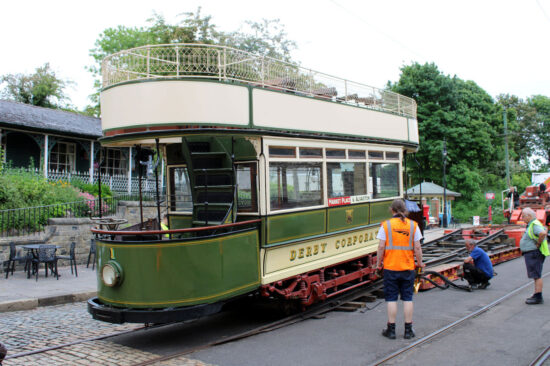 After 298 was safely unloaded and back in the depots attention was turned to the da’s departure – Derby 1. At Stephenson Place here we see Derby being loaded onto the low loader. 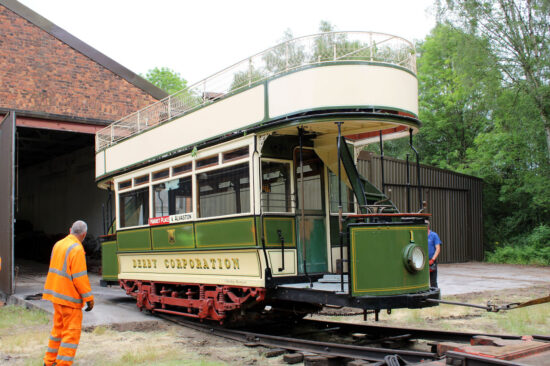 And then 1 is unloaded at Clay Cross with the storage building there seen behind. (All Photographs by Peter Whiteley, 11th June 2021)