Posted on Saturday 12 June 2021 by Gareth Prior

The third of the new fleet of CAF built trams for the West Midlands Metro has now arrived at Wednesbury Depot – coming just a couple of days before all of its older cousins were withdrawn from service for precautionary checks. 38 – which is in fact the first of the new order but has been undergoing testing in Spain before delivery – arrived in the West Midlands on Wednesday 9th June.

As we’ve mentioned before although there are currently 21 of these “third generation Urbos” trams on order for West Midlands Metro it is planned that they will be delivered in two batches. The first batch over the next few months will see eight delivered (with five in service before year’s end) with the other 13 not coming until 2023. With three now at Wednesbury that must mean there are another five to come in the relatively near future.

While 38 is the third to be delivered it is the first of the new fleet and is also the first of three to be delivered with numbers already applied. These are the smaller type of number as seen on some of the earlier trams to receive the new livery and seem to be required as the tram end has a slightly revised design to the original Urbos3 trams. This is one of a number of subtle differences to the trams both externally and internally (we understand that this includes more comfortable seats – we’ll wait and see on that one!). In all the press releases these trams have been described as “third generation Urbos trams” and it is not known whether they are officially designated as Urbos3s or not.

As with the previous deliveries 38 entered the UK in Bristol (and all future deliveries are also expected to come this way as well). It arrived there on Tuesday 8th June and then started the last leg of its journey to Wednesbury on Wednesday 9th June where it arrived shortly before midday.

With the issues affecting the original Urbos3 trams taking up workshop time the commissioning of not only 38 but also previous deliveries 39 and 40 is unlikely to be a priority for now and they will be stabled at the depot until such a time as proper testing gets underway. 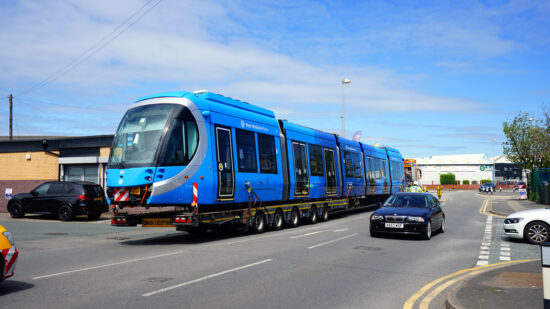 38 arrives at Wednesbury on the back of the low loader. Here we can see the number on the end (as well as on the side at the back of the front section) in the smaller format along with the slightly revised end layout. 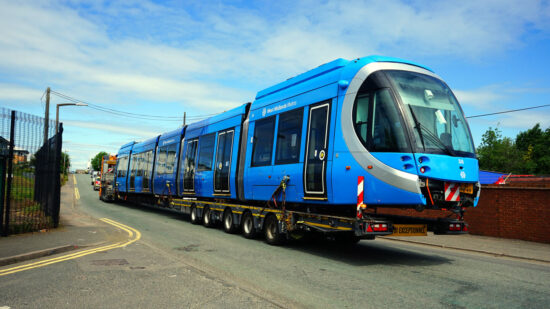 Another view of 38 as it arrives at its new home. Note also that the battery compartments are already in place so there will be no need for retro-fitting.

5 Responses to In Pictures: West Midlands Metro 38 arrives at Wednesbury