For obvious reasons a lot of the collection at the Crich Tramway Village relates to first generation tramways but to help fill a gap in the collection Nottingham Express Transit have recently donated signage with a view to a new display on the history of trams in Nottingham being created at the museum.

With signage on the original section of the NET network having been updated to match that on the phase two extensions a number of signs had become redundant but after a suggestion from Ryan Breen – who as well as being a driver on NET is a volunteer at Crich – it was decided to donate it to Crich instead of disposing of it.

Ryan explained more: “The majority of the museum’s collection is from the first generation of tramways that almost all closed in the 1960s, and opportunities to preserve memorabilia from second-generation systems are, at the moment, very uncommon. Rather than see these old signs sent to scrap, it made sense to donate them to the museum to preserve a little modern history for future generations to enjoy.”

Trevor Stocker, Operations Manager, said: “We’ve previously donated buffers that were originally installed at the old Station Street tram stop, and these are now in operation at the Glory Mine end of the preserved tram line. The fact we have a number of employees volunteering at the museum in their spare time also reflects NET’s commitment to preserving our transport heritage while delivering the best possible service to customers, both now and in the future.”

It is planned that the signs will be included in a new display to show the history of trams in Nottingham from the days of the Corporation Tramways all the way up to the modern Nottingham Express Transit system.

Kate Watts, the recently appointed Curator at Crich, commented: “It’s important that the museum continues to tell the national story of tramways by collecting items relating to the current systems in use. These signs from NET are a welcome addition to the collection and the curatorial team are now planning how best to display them for visitors.” 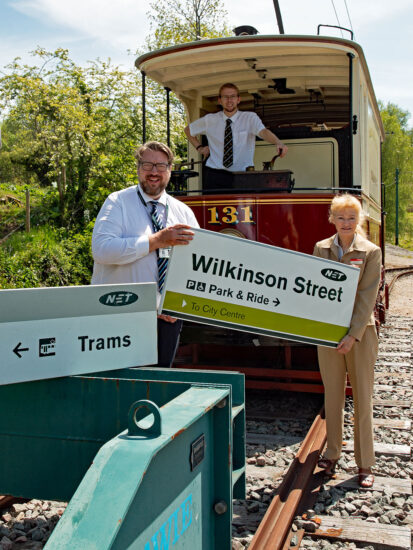 Some of the signs are seen being presented by Trevor Stocker to Amanda Blair from Crich with Ryan Breen at the controls of Cardiff 131. (Photography courtesy of Crich Tramway Village)