We’re out and about again as this time we head out onto the newest tram extension in the UK – Manchester Metrolink’s Trafford Park line.

As timings of opening tramway extensions go – extensions which serve a major shopping centre no less! – the Trafford Park line would probably go down in history as probably not the best! Officially opening on 22nd March 2020 just as the first big restrictions were being introduced in the country the line leaves the Eccles line at Pomona and runs for 3.4 miles to The Trafford Centre. Not only does it serve the big shopping centre but it also gives good access to Manchester United’s Old Trafford football ground and the Imperial War Museum North – all of which have had large periods where they have been completely closed so not exactly adding to passenger numbers for the line! 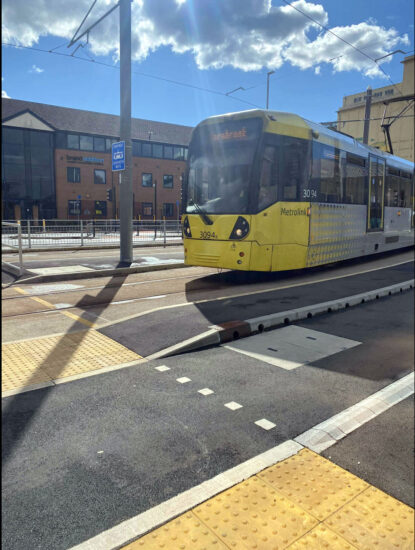 This is 3094 which is heading a The Trafford Centre (following the change of ownership of the shopping centre the “intu” has been replaced by “The” in all literature) to Cornbrook service. It is running on Trafford Wharf Road and is close to the Imperial War Musuem North stop. (Photograph by Kate Meeson)