Whatever Happened To? Crich Tramathon 2005 – Gateshead 5

Its that time of the week again when we head to the Crich Tramway Village’s 2005 Tramathon to see “Whatever Happened To?” one of the trams which ran on the day. This time we feature another tram which is no longer operational.

1927-built Gateshead 5 ran on two tramways in its operational career, firstly Gateshead & District Tramways (part of the British Electric Traction Company) until in 1951 it was withdrawn and sold on for further use. This saw the tram move further south to run on the Grimsby & Immingham line which was operated by British Railways. Renumbered as 20 it remained in service until final withdrawal came at the closure of that line in 1961. Arriving at Crich two years later and was one of the earlier trams to run under its own power. Returning to its Gateshead identity, it ran in passenger service for the first time in September 1966 but by 12th June 2005 it was nearing the end of its current operational life.

That was to come just two years later in 2007 with the tram being withdrawn as it required another spell in the workshops. In 2021 the tram still waits this work and is now a static exhibit, still resplendent in its Gateshead livery although it has been seen out and about for photos now and then. The most recent of these appearances was in 2019 when it was positioned alongside fellow British Electric Traction Company vehicle, Barnsley & District bus 5. It has recently been moved from the depots to a new position in the Great Exhibition Hall. 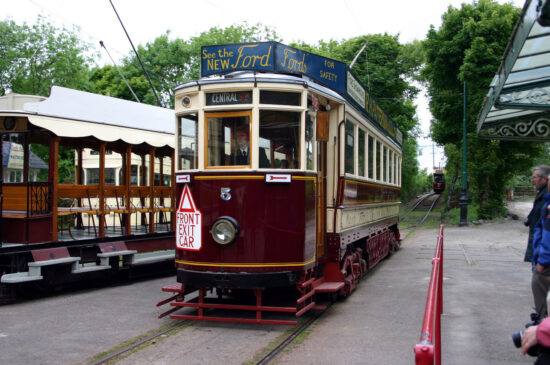 In this 2005 view we see Gateshead 5 at Wakebridge when heading back down to the main museum site. Blackpool & Fleetwood 2 can be seen alongside, Sheffield 510 just beyond that and London County Council 106 in the distance. 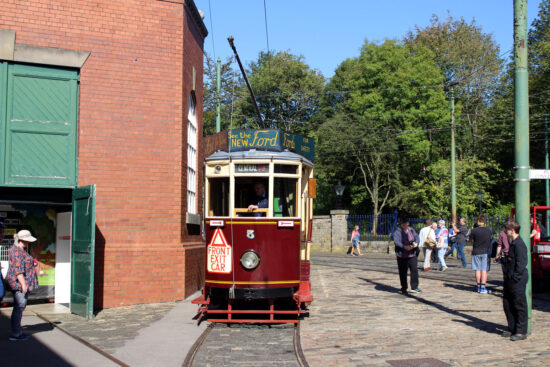 On 21st September 2019 and 5 is seen being shunted around the depot yard during the Crich 60 event when it would be posed alongside Barnsley & District bus 5. (Both Photographs by Gareth Prior)