In this instalment of “Lockdown Walks” we take a trip to the West Midlands Metro for a view of one of the Urbos3 trams in service.

During the move from the tram system in Birmingham and Wolverhampton being known as Midland Metro to the West Midlands Metro and the rebranding process this involved the biggest change noticeable to the casual observer was the new all blue livery. As we saw, when the livery started to change a hybrid style was first applied seeing the magenta sections replaced by blue while those white/silver areas remained as such for a while. But as time moved on the white/silver sections also went blue – all except for one tram! For some reason 19, which had been chosen to commemorate the 20th anniversary of the original line with a special livery, stayed in the hybrid livery for some time even receiving new advertising vinyls for Marks Electrical in August 2020 while retaining the white/silver sections. But finally in February 2021 it was goodbye hybrid and hello full blue as the tram received the full house style brining an end to any trace on the trams on the Midland Metro livery. 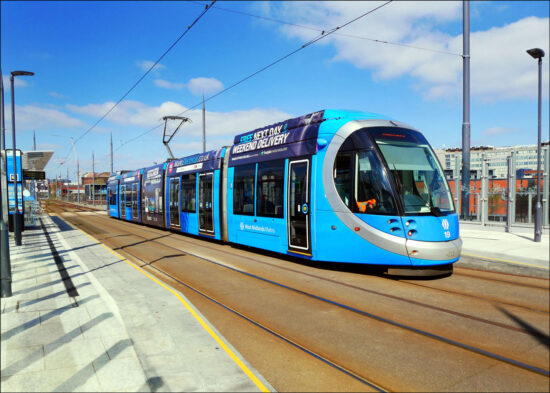 This photo shows the full blue 19 – still with the adverts for Marks Electrical in place – making the stop at a sunny St Chad’s on the way into Birmingham City Centre. (Photograph by Roland Bull, 2nd April 2021)