Posted on Saturday 9 January 2021 by Gareth Prior

The next stop in our world tour is Den Haag in The Netherlands, or The Hague to give it its English name, a location famous for being the home of the International Court of Justice as well as being the seat of the Dutch Parliament.

The tram network in Den Haag is standard gauge and today consists of twelve routes with a total length of over 100km. The first horse trams operated way back in 1864 with electric trams starting to run from 1904. There were also steam trams which overlapped both horse and electric tram eras.

This first image is taken at the Scheveningen Noorderstrand terminus at Zwarte Pad which is home to  slightly bleak turning circle situated at the north end of the tow, with direct access to the beach and dunes stretching further north along the coast. GTL8 type tram no. 3143 is seen here running on Route 1 to Delft Tanhof while Siemens Avenio 5013 is on a short working of Route 9 to Centraal Station. A further Avenio waits in one of the storage loops. On the way to the city centre Route 1 passes the Vredespaleis where the International Court is based with Route 9 going via the Madurodam miniature city. This photo was taken on 3rd July 2017. 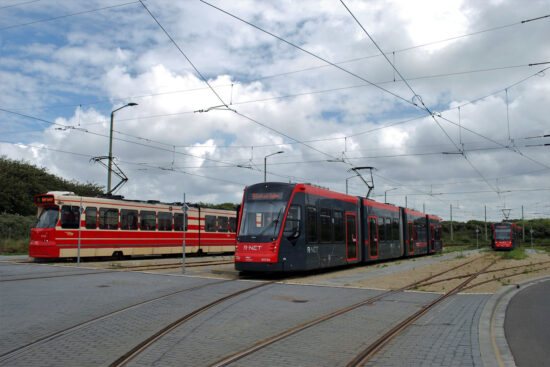