The first of the trams asked to leave Rigby Road Depot has found a new home with the Fylde Transport Trust announcing that Twin Towing Car 671 will be moving to the North West Museum of Road Transport in St Helens. It will go on display – which also houses a couple of buses from the FTT collection – and will receive a repaint into the cream livery the towing cars were originally painted in.

671 last ran in Blackpool during 2010 along with its matching towing car 681 but since then the two have split and as with 681 remaining in Blackpool Transport ownership their splitting will remain. Of all the trams which were sold off following the closure of the traditional Blackpool Tramway and its upgrade, 671 possibly has the most complex history of all going through several different owners – including some twice! Originally acquired by Merseytravel the tram moved to Knowsley in 2011 but was back in Blackpool in 2012 when ownership passed to the Lancastrian Transport Trust. After several years in outside storage it was reported that it had been acquired by the Tyne Tees Transport Trust although its not clear if this transfer of ownership ever happened as in 2015 it returned to Rigby Road for storage.

Now six years later and the tram is set to hit the open road again and be transferred to St Helen’s. It is hoped that it will be able to be moved and prepared for display before the North West Museum of Road Transport reopens later this year although that will be dependent on Covid-19 restrictions. It will be displayed in as near original towing car condition – to show when they did occasionally run without trailers – with a repaint into all cream and the reinstatement of hoses at both ends of the tram.

Eric Berry, Fylde Transport Trust trustee, said: “We are pleased that 671 will be going on display to the public at St Helens, joining two FTT buses which are already there. We look forward to working with the North West Museum of Road Transport Board to make an interesting and appropriate display around the tram.”

Keith Naylor, Chairman of the museum, said: “The addition of a Blackpool tram will be an added attraction for the museum and we extend an invitation to al tram enthusiasts and members of the public to come and see it. It will also enhance the educational offering to the many school parties which visit us.”

The North West Museum of Road Transport is within the old Hall Street tram depot in St Helens and has previously been the home of Blackpool Coronations 304 and 663 so will be no stranger to seeing Blackpool trams within its walls! More details of the museum can be found at https://www.nwmort.co.uk/. 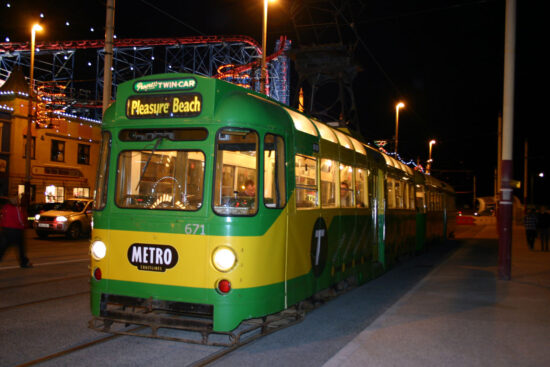