For the next few editions of our traditional tram “Picture in Time” series we will be featuring what is now known as the Crich Tramway Village with a batch of images taken through the years at the museum.

We start off with this fascinating image which has been dated as October 1965 and is a view of what is now the depot yard but was then just some tracks in front of the depot without all the fencing, gates and the like. It has been taken from road leading to today’s car park and entrance and clearly shows four trams with a few more vehicles also partially visible.

The first tram we see is Sheffield 46 which was part of the operational fleet at the time (although it would only remain so until 1973 and left Crich for off-site storage at Clay Cross in 2005). Immediately behind 46 is another Sheffield tram in the form of 510 in its very familiar Last Tram Week. Then at the very front of the depot is Blackpool 49 in what is now an unfamiliar red and white livery. What may not be immediately visible in this shot is that there is a ladder leaning up against the front of 49 with a volunteer working on the roof – we’re not sure that would be acceptable now!

But possibly the most interesting part of the image is on the left – Cheltenham 21. We featured this tram back in August 2020 as part of “Trams &” series when we saw it being moved by road from Cheltenham to Derbyshire in July 1965 and now three months later and it is safely in its new home. However, because it wasn’t a standard gauge tram it wouldn’t be able run at Crich and would eventually leave the countryside in 1981 for Bournemouth being returning to its home town in the 1990s where it remains in store today. 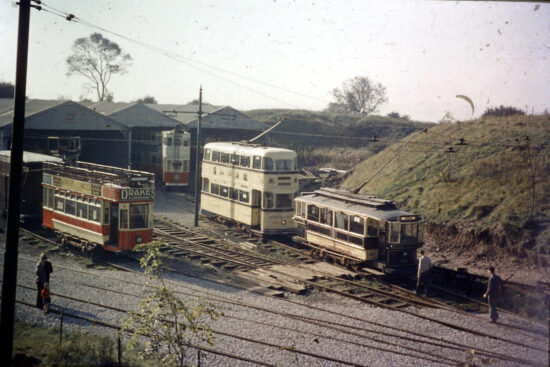