Spooky goings on in this latest look at photos which didn’t quite end up as we had expected!

This image was taken at North Pier on 31st August 2008 with night having fallen on the first weekend of the Illuminations for that year. This was a Sunday evening and to add extra capacity to the service there were several Balloons out on specials and in this view we see two with 701 on the left (Palm Beach Hotel advert) and 721 (the Pleasure Beach Forbidden show ad). So far, so good but obviously just as the finger was pressed down on the shutter someone decided to walk across the path of the trams judging by the shadowy figure in front of 701. Unless, of course, it was a ghost! Ah, never mind, better luck next time! 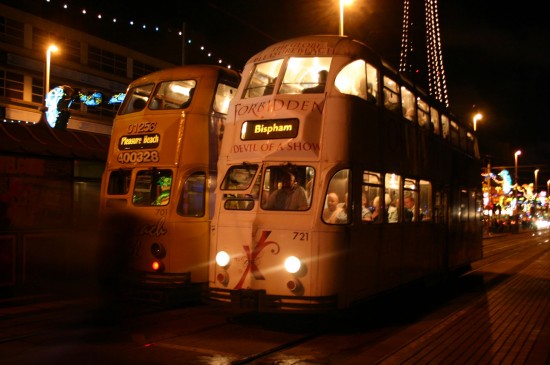