So Nearly, Not Quite! Docklands Light Railway 46+23

Its not just traditional trams where the photo which comes out of the camera wasn’t what we expected when we pressed the shutter – we are all into equality and can do exactly the same with modern trams and light rail vehicles too!

The below photo was taken at the old Pudding Mill Lane station on the Docklands Light Railway line to Stratford (the original Stratford line and not the newer Stratford International line) on 9th March 2010 and shows a double unit on the approach to the station. This version of Pudding Mill Lane was a cramped island platform which did make photography difficult, not helped by the various poles and masts surrounding the tracks too. And it is one of these poles which gets in the way as 46+23 approach the stop on the way to Stratford. Ah, never mind, better luck next time! 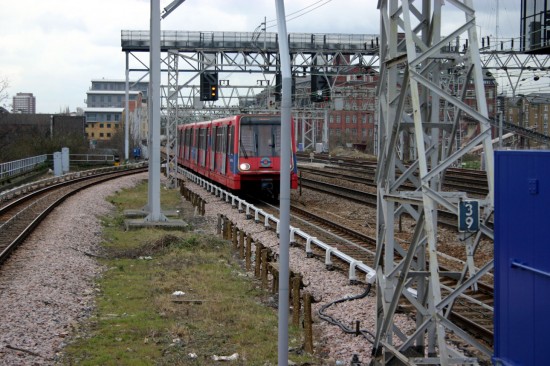