Detailed plans for the operation of historic trams on the Blackpool tramway during the 2013 season have at last been announced, with a number of changes to the service that was offered last summer. With poor passenger numbers during 2012, it was inevitable that some changes would be made – and as a result of experience gained last year, heritage trams will be running much less frequently this year. However, a more appealing package will be offered to customers, which will hopefully make up for any disapointments.

Last year, heritage tours were advertised to run each weekend from Easter onwards, and then daily throughout the school summer holidays until the start of the autumn illuminations, when the tours switched to operating every evening with no daytime workings. Unfortunately, patronage was very poor over the summer months, and so the decision has been made that daytime tours will only be operated on Bank Holiday weekends. This means that vintage trams will be out and about on all four days of the long Easter weekend (29th March to 1st April inclusive), and then over the May Day, Whitsun and August Bank Holiday weekends. As expected no significant alterations are expected during the illuminations as this was by far the most profitable time of year for the heritage tram operation.

Clearly the reduced dates for heritage tours in 2013 is intended to encourage enthusiasts from out of town to visit on these dates, which will hopefully make the tours more profitable than they were last season. To add further incentive to visit, Blackpool Transport have a few more tricks up their sleeve to offer good value for money, whilst retaining last year’s £10 fare for a day ticket valid on all BTS tram and bus services. Perhaps the most exciting development will see vintage trams stretch their legs beyond the familiar Pleasure Beach to Little Bispham section, and run to Fleetwood! The first and last tour of each running day will be extended north to Fleetwood, meaning that both of the two cars in use will make it to the northern terminus just once. It is intended that all other journeys will terminate at Bispham, the tour route being shortened slightly to allow extra time for the single Fleetwood runs. Many enthusiasts have bemoaned the lack of opportunities to ride on any of the retained heritage trams to Fleetwood Ferry so hopefully this will encourage many more people to part with their cash and enjoy a trip back in time over virtually the entire length of the tramway.

In a further positive step, Easter will be a bumper weekend for the heritage trams as four different historic cars are rostered to operate each day! In addition to the usual two tours, a further two cars will be put to work between Pleasure Beach and North Pier for the day. These trams will only be able to load and unload at the designated ‘heritage’ stops but once again this will offer greatly increased opportunities for tram riding and photography. To be able to ride on four different vintage trams – two of them to Fleetwood – as well as the Flexity2 trams and buses all day for just £10 should be seen as an absolute bargain, and hopefully Blackpool Transport will be rewarded with a healthy number of ticket sales on the first really busy weekend of the 2013 season.

Although the use of additional heritage trams is expected to be a one-off for Easter, both May Bank Holidays should see two of the widened double-deckers out on specials alongside the two genuine heritage cars, providing even more interest for enthusiasts. Efforts will also be made to swap one of these during the course of each day, and reportedly all nine of the B fleet will be used during May. This will include car 720, which did not run at all in 2012, but the damaged doors on this car have now been repaired and it will join its sisters back on the promenade soon.

The selection of heritage trams available for service in 2013 should be the same as last year, with a couple of surprise additions. Following use as a snowplough car over the past winter, Balloon 701 is to be reactivated and should join the available pool of cars from May Day onwards. It is also believed that Centenary car 642 will be returned to use for just one day, joining its sister 648 in action. A refurbishment of Brush Railcoach 631 is also progressing well and this tram will also rejoin the heritage fleet later in the year. With the likes of Bolton 66, Standard 147 and Boat 600 already available for use, there should be a fantastic selection of different trams to be sampled this year and it must be sincerely hoped that their operation will be well supported. This is of course the only way to ensure that these trams have a viable future in Blackpool, and pressure has been placed on BTS management to cut costs. At least one of the Board of Directors recommended to axe the heritage tram service completely, and the resulting service is very much a compromise. If the revised service does not find favour, it may well be dropped in 2014 and so this is very much a case of ‘use it or lose it’. Blackpool Transport are quite obviously very determined to build a secure future for its priceless collection of vintage trams, but now it’s over to us, the enthusiasts, to support their efforts and do our bit to contribute towards this! 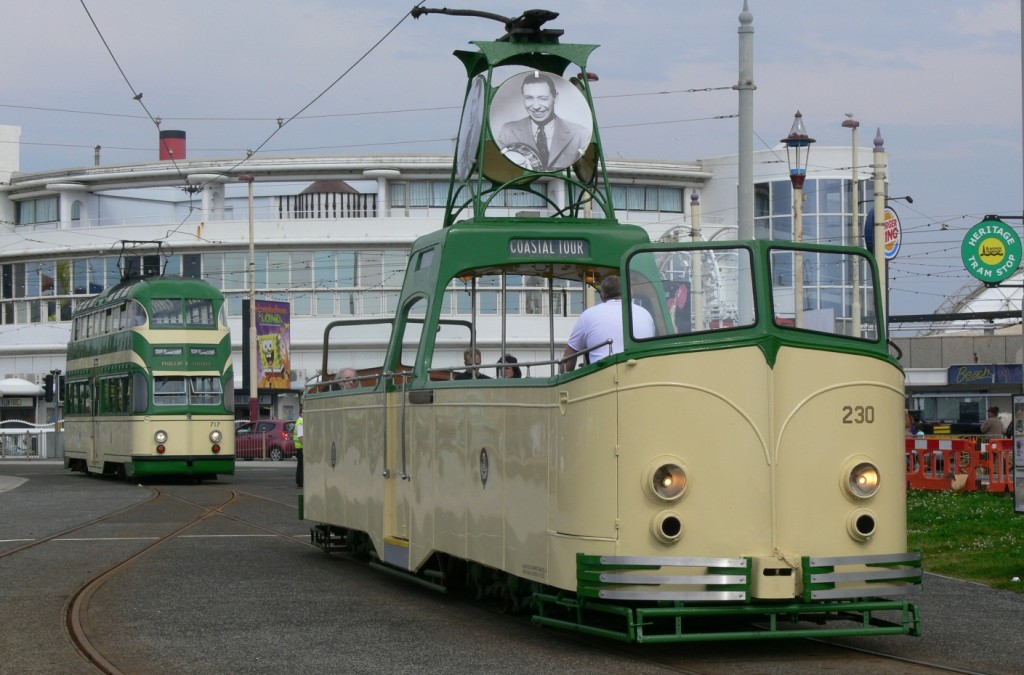 Two of the trams that are potentially ready to commence the heritage operation for 2013 - Boat 230 and Balloon 717 - repose at Pleasure Beach last August, with 230 standing by the heritage tram loading stop. (Photo by Andrew Waddington)