Posted on Saturday 13 July 2019 by Gareth Prior

This week our modern archive image comes from Midland Metro showing one of the original T69 trams in its second livery style.

The tram in question is 10 which at the time of this photograph – 7th July 2010 – was in the Network West Midlands Magenta and Silver livery style, a style which was carried forward to the new Urbos3 trams when they were introduced. 10 is just approaching The Hawthorns with a full length journey from Birmingham Snow Hill to Wolverhampton St George’s.

As for 10 this tram was delivered to Wednesbury Depot on 23rd September 1998. Having suffered accident damage the tram was reformed with part of 09 and returned to service like this in October 2008 when it also received the new livery. Having been withdrawn from service the tram was moved to Long Marston for storage on 24th March 2016 and although originally presumed to have gone for scrap it has in fact remained in Warwickshire. 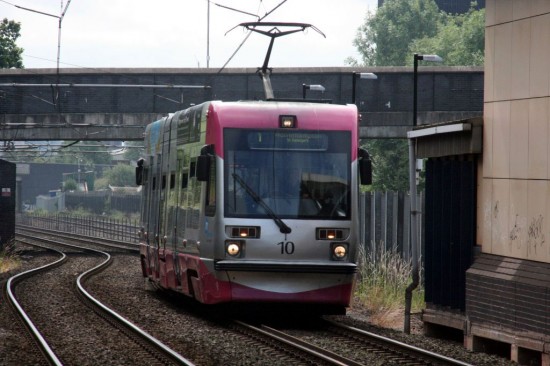