In Pictures: Ratchet Car 14 to the rescue!

Posted on Monday 3 September 2018 by Gareth Prior

It was meant to be just a normal test run as final preparations were made ahead of its official launch a few days later but on Friday 31st August Ratchet Car 14 was pressed into service to pick up some passengers from Laxey – the first-time normal fare paying passengers could enjoy a ride on a Ratchet Car since 2000 when 18 last ran!

14 was on heading back to Derby Castle on another test run during its extensive commissioning period to ensure everything was ready in time for its launch just three days later when a severely delayed service car meant a number of passengers were waiting a trip back to Douglas. Rather than make them wait the decision was made to allow them to travel back on board 14. The last 14 had run in passenger service was in 1978 making this a very special journey for those lucky enough to be in the right place at the right time!

Of course since then 14 has been officially launched into service with this launch taking place on Monday 3rd September during the MER 125 events. 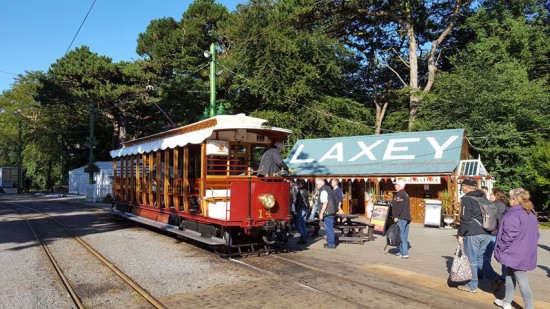 Passengers look to board 14 at Laxey on 31st August. (Photograph by Nick Bartlett)