Posted on Wednesday 15 August 2018 by Gareth Prior

Although it has been welcoming passengers for six weeks the new Seaton Tramway terminus in the town of the same name was officially opened on Saturday 11th August in a special evening ceremony which showcased the flexibility of the new space which can be a tram terminus by day and a multi-purpose events space by evening! As well as the obligatory cake the event also saw an appearance by Brotherhood of Man.

More than 200 specially invited guests were present at the event which included local councillors, businesses, staff, project contractors and friends of the tramway. This special event saw an end to the project which has been several years in the making in providing a new all weather terminus for the tramway which not only provides covered accommodation for the trams and passengers but also has a café and shop.

Jenny Nunn, Chief Executive of Seaton Tramway, commented: “After several years on the drawing board, I am proud to be stood here tonight to celebrate with you the safe delivery of a new station and the birth of a new era in Seaton Tramway’s long history in Seaton.”

The Chair of the Seaton Tramway board, Bruce Warnes, added: “Now that we can stand in this incredible space which is so much more than a building, so much more even than a tram station. There are many people, too numerous to thank each by name, but who I would like to extend my sincere thanks to for making this happen.”

The evening saw entertainment from local community Djembe drum group, Drum4Fun, brand new local Youth Drama group who gave their first ever public performance with excerpts from a forthcoming production of Bugby Malone, soloist Mason Castree and the aforementioned Brotherhood of Man. Of course, as well as being Eurovision legends Brotherhood of Man are no stranger to the tramway having previously performed there for the 40th Anniversary which included a brief act on top of 12 at the old terminus.

A cake – made by Jessicakes – which was decorated with trams and scenery from the tramway and topped with a recreation of the new station in sugar icing was cut during the evening. It was cut by Jenny Nunn and Bruce Warnes with help from Lyn Shears, the widow of Trevor Shears who gave a generous donation towards the construction of the terminus. 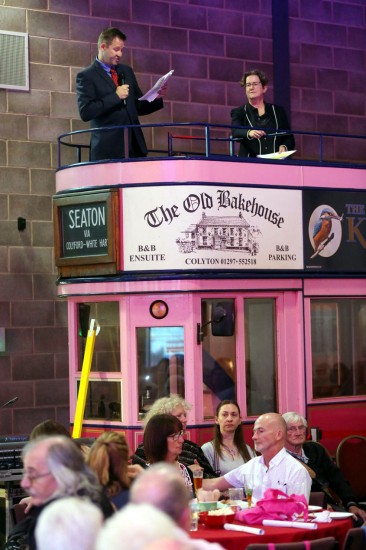 Bruce Warnes and Jenny Nunn on the top deck of 11 give speeches at the opening. 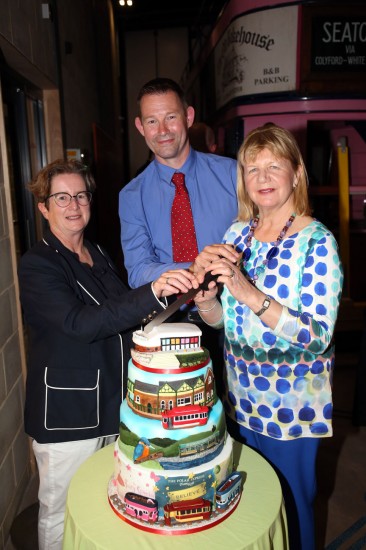 Look at that cake! With trams 11, 16, 9 and 14 all in glorious icing and the new terminus on top Jenny Nunn, Bruce Warnes and Lyn Shears cut the cake. (Both Photographs courtesy of Seaton Tramway)