Picture in Time: From the Tower overbridge

Today we include a photo featuring five different trams for the latest edition of Picture in Time.

This image is taken from the now gone overbridge at Tower which provided an unique perspective for photos although one which personally I didn’t seem to use too much. The photo was taken on a sunny 7th September 2006 and not only provides a look at some of the trams still running at that point but also illustrates the old Prom and road as well as the three track layout at Tower.

In the foreground of the image we see Centenary 648 in its attractive all over advert for Vue Cinema which had recently opened in Cleveleys. The tram is operating specials and is on the centre track waiting time before heading back to Pleasure Beach. Alongside on the northbound track is Balloon 710 in one of the Metro Coastlines liveries with this tram running through to Cleveleys. Further north we see Balloon Car 726 (advert for Thwaites) running south having just passed Princess Alice which seems to have a healthy load of passengers outside. Then further into the distance at the North Pier stop is another Balloon Car in the form of 720 which at this time was in an all over advert for Eclipse. 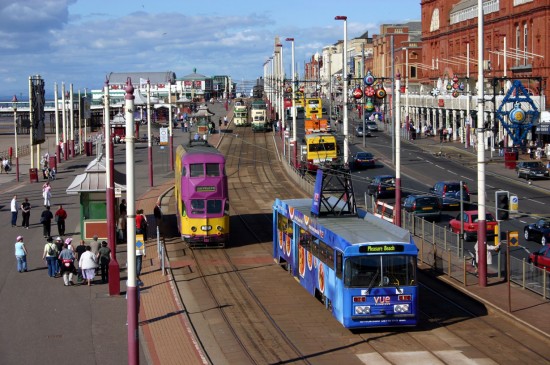