Posted on Tuesday 18 April 2017 by Gareth Prior

Today Picture in Time is heading back to Crich for a view of a tram which although it remains on site at the home of the National Tramway Museum in 2017 is in a different identity. It is Vienna 4225 now better known as New York 674.

It was as New York Third Avenue Transit Company 674 that the tram was built as an one man operated vehicle in 1939 and operated in the American city until after the conclusion of World War II. At this point as part of the Marshall Aid programme it was withdrawn from service in New York and was transferred to Vienna (in total 42 such trams made the journey). Renumbered as 4225 it remained in service in Austrian until 1969. Accepted by the British Ambassador to Austria the tram then made another journey across the seas, this time rather shorter than before as it went to Crich, arriving at the museum in 1970. It ran until 1975 and then again from 1977 to 1985 initially as 4225 before becoming New York 674 in 1979. Today the tram is a static exhibit at Crich. 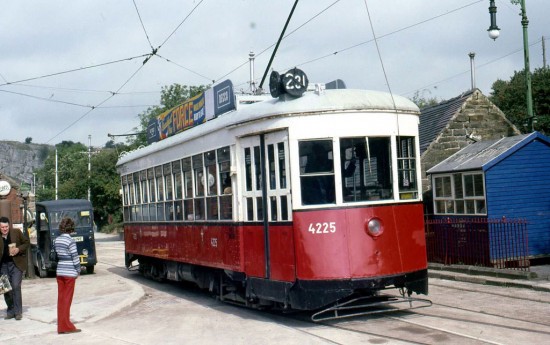