Posted on Thursday 23 March 2017 by Gareth Prior

The latest edition of Picture in Time is once again in Blackpool and we stop in 1981 for an image of Blackpool Boat 606 – a tram which now resides in the United States of America.

606 was delivered to Blackpool as 235 in 1934 and by the time this photograph was taken on 16th August 1981 it had received a more simplified livery of green and cream with single piece windscreens in place. In the following 19 years 606 received a Blue and Yellow then Yellow and Blue livery scheme and two piece windscreens before it became part of the deal which would see Standard 147 return to Blackpool. It ran for the last time in the UK on 28th August 2000 – by which time it had lost its windscreen in preparation for transport – before it left Blackpool a little over two weeks later for its new life in the USA, where it remains today.

In this view we see 606 pulling away from North Pier and approaching the Metropole Hotel with a northbound service to Bispham on 16th August 1981. A Twin Car is also seen approaching from the north. 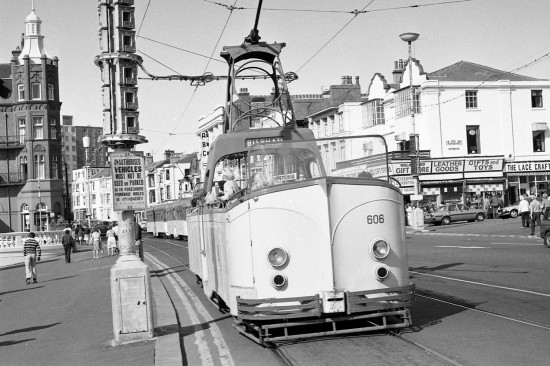