60 Years in Preservation: London Tramcar no. 1858 by Tim Major

In July 2012 London Transport HR/2 tramcar No. 1858 celebrates 60 years since its purchase from London Transport by a young tram enthusiast Peter Davis, probably the first time a tramcar had been acquired for preservation by a private individual. Tim Major brings us this article which seeks to bring together some history of the tram and in particular the time since it was acquired for preservation.

No 1858 was built for London County Council Tramways by English Electric in 1930 designed for service on hilly routes. The new design of body was mounted on EMB heavy weight equal wheeled trucks with four 45hp motors. The body was all metal, the lower deck in the form of a large straight sided box was steel and the upper deck framework aluminum. The lower deck was ventilated by small windows mechanically operated, over the main saloon windows and the upper deck windows were half drop windows.

The tram and its classmates operated on routes through the Dulwich area of south London, which included Dog Kennel Hill and the braking systems on the car included a ‘run back brake’ to ensure safety when stopping on an ascent of the hill and prevent running away.

As built the tram had open platforms with the driver exposed to the elements and in 1939 the platforms had timber framed screens fitted along with all the other members of the class which were similarly fitted.

The tram continued in service until the closure of the London tram system latterly operating out of New Cross Depot operating on routes 72 and 46. Prior to its withdrawal Peter Davis had approached London Transport about the acquisition of 1858 as the tram was seen as a typical example of a London tram. On the last day of operation 6th July 1952 Peter Davis was offered the opportunity, unofficially, to drive his acquisition down Westhorne Avenue, under the supervision of the London Transport Driver. I think enough time has elapsed since the withdrawal of the tram to ensure there are no official repercussions!

Prior to the closure of the London tram system, London Transport constructed a yard to receive trams following withdrawal, at Penhall Road and when 1858 came out of service it moved to the yard for storage, whilst the other residents were scrapped.

Having bought twenty tons of London Tram the new owner was confronted with the problem where to keep the tram, at this time there were no transport museums, which could accommodate such a vehicle. Negotiations took place with the management of Chessington Zoo and permission was given for the tram to be displayed on a length of track. So on 2nd September 1952, 1858 was driven out of the Penhall Road yard and stood for a short time in Woolwich Road with its lights on, before being towed to Charlton works (on the wrong road) by a London Transport tractor over the disused conduit tracks in order to be prepared for loading for the journey to its new home. This movement was organised by the Charlton Works Manager who in a letter to Peter Davis advised ‘The move will take place between 11pm and midnight tomorrow, Tuesday2nd September, and whilst I have no objection to any of your group members being present, I should like to make it quite clear there must be no demonstrations of any character’.

The move to Chessington was carried out by Evan Cooks of Peckham, using a trailer hired from Broadway’s Caravan Sites of Petersfield (who had earlier used the trailer to carry a number of tram bodies from Hampstead to Hayling Island). For this journey 1858 was removed from its bogies, which were transported separately, and was reassembled at Chessington Zoo, using tower jacks hired from London Transport.

The tram settled into its new home and was subsequently used for enthusiast meetings. Then in 1964, the zoo had proposals to redevelop the area where 1858 was sited and the search for a new home began and several locations considered, including:-

Hayling Island where a group had been formed to try and operate the former British Railway branch to the island.

Crich where the tram could join the growing collection of tramcars

Carlton Colville where some members of the Tramway Museum Society were restoring Lowestoft Corporation Tram No.14.

Ultimately it was decided to move the tram to Carlton Colville, however there was a problem the move would cost £250 and required a £200 contribution towards the erection of a depot to protect the tram. With the assistance of the ’O’ Gauge Group of the Tramway and Light Railway Society fund raising began and ultimately sufficient funds were raised for the transportation from Chessington to Carlton Colville to take place.

The movement of the tram was carried out by the haulage company Frederick Attwood of London and the tram, complete with its trucks, was craned onto an eight wheeled semi-trailer, hauled by a large Scammell ballast tractor. With the tram still mounted on its bogies, due to the plough carrier under the car having to be left in place and perched on a trailer the load was quite high and it was necessary to have one of the crew to lift hundreds of overhead wires over the roof during the course of the three day journey. What would have Health and Safety made of that today? According to a report in the local paper at the time it was stated that one cable moved carried 11,000 volts and it was fortunate for the person on the roof that it was not damp at the time’.

The journey to East Anglia up through Kingston, then onto the North Circular Road with an overnight stop at the Ace Cafe and then the journey took two days up the A12, which was nothing like the road it is today, was uneventful, apart from the overhead wires until a short distance from its new home when a number of low tree branches broke a number of upper deck windows. The tram arrived at its new home on 10th April 1964 and was positioned on a length of track adjacent to Lowestoft tramcar no.14 located at the rear of Hedley House in the former kitchen garden of the house in what was then the outskirts of Carlton Colville. Subsequently 1858 and 14 were joined by Glasgow Corporation ‘Coronation’ car 1245 having made the journey from the closed motor museum at Measham in Leicestershire. 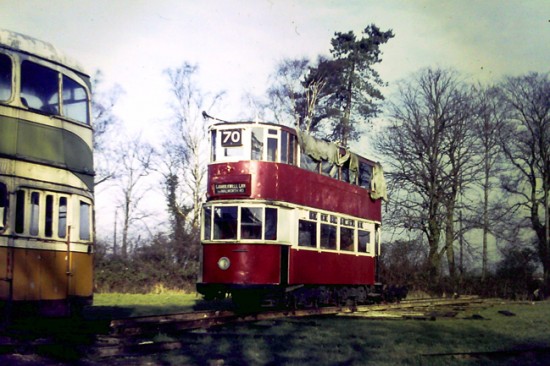 1858 in the company of Glasgow 1245 at Carlton Colville whilst being moved to the current Museum site around 1968. (Photograph courtesy of EATM Collection)

1858 then settled down to a relatively quiet life whilst works to form the early stages of a tram depot to house it took place. The next problem was to move the assembled collection of trams over a ditch in to the adjoining meadow where the depot had been built and turn the trams through ninety degrees to get them into the building. The only means available was to lay temporary track on sleepers and using only two sections of curved rail the trams were manoeuvred across the ditch into the corner of the meadow and in a series of shunts the trams made there way into the depot and for the first time in twelve years the tram was undercover.

Work to develop the museum then carried on until 1971 when the first section of overhead was erected and 1858 was persuaded into operation alongside Blackpool Corporation Tram 159. Whilst 1858was made operational it was evident that London Transport had got every ounce of use out of the car up to its withdrawal in 1952 and mechanically it was very worn and externally the car had suffered during its period of outside storage.

In the late 1970’s the exterior of the car was improved by the fitting upper deck panelling carried out by coachbuilders from Eastern Coachworks in Lowestoft. Subsequently in the early 1980’s works were carried out on the brake mechanism to deal with worn linkages and the roof was replaced in order to replace areas repaired with hardboard by London Transport. Ultimately in 1986 following these repairs 1858entered service at the museum in July 1986 at a special event that coincided with the 34th anniversary of the closure of the tram system in London.

1858 is now over eighty years old and still takes a turn carrying visitors at the museum sharing duties with the other operational tramcars at the museum. Although it has to be recognised that with continued operation that additional work will be necessary by members of the society to keep the car operational.

Tramway enthusiasts should be grateful to Peter Davis who, all those years ago put so much effort into saving what is now a unique tram that will show future generations a typical London tramcar.  Thanks must be given to all those enthusiasts who contributed in various ways to ensure the preservation of the only surviving HR/2 London tram. 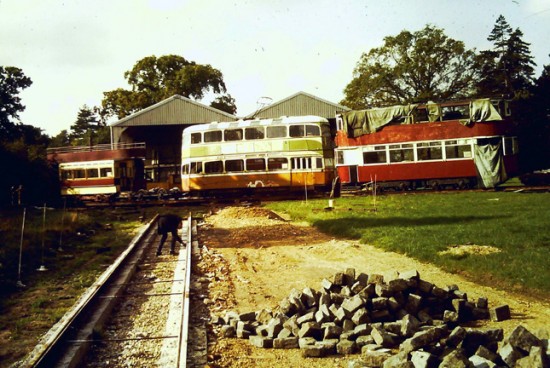 A truly fascinating photo from circa 1968 at what we now know as the East Anglia Transport Museum showing the subject of this article London Transport 1858 alongside Glasgow 1245 and Lowestoft 14. Of these trams only 1858 is a runner in 2012 with 14 undergoing a restoration at Carlton Colville and 1245 now at Summerlee in Scotland also under restoration having also been in Blackpool since leaving Suffolk. (Photograph courtesy of EATM Collection)