Posted on Saturday 12 November 2016 by Gareth Prior

This weekend we will be taking a look at the Blackpool Boat Cars that escaped the UK for the United States of America. Tomorrow we take a look at the Californian Boats but first up we head to Maryland to take a look at Boat Car 606 which has now been in the US for 16 years.

Now situated at the National Capital Trolley Museum 606 originally left Blackpool on 14th September when it was used as part of the deal to return Standard 147 to the UK. It headed to the Gerald Brookins Museum of Electric Railways and operated there from 2001 to 2005 before it was put into storage. The National Capital Trolley Museum in Maryland purchased the tram in 2009 from the Lake Shore Electric Railway Museum (successor to the Brookins Museum) and it has operated there since 2010.

606 retains its Yellow and Blue livery as applied in Blackpool way back in October 1998 and according to the National Capital Trolley Museum’s website (http://www.dctrolley.org/) is often operated during the summer and is displayed in Street Car Hall. Unfortunately when Stephen Cobb visited on Thursday 20th October 606 was confined to the depot – despite it being 87F! In this view we see 606 at rest with its trolley pole tied down. 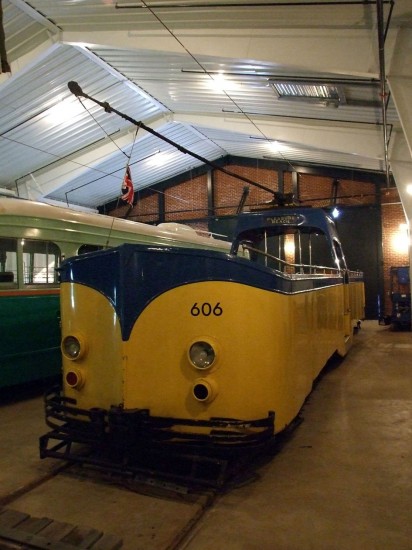