Posted on Friday 14 October 2016 by Gareth Prior

We take another look at Blackpool’s Illuminated tram fleet in our latest visit to the archive with a view of the Western Train 733+734 back in October 1962.

When this photo was taken the Western Train was a little over a month into its operating career having only entered service in September 1962 following its conversion from Railcoach 209 (the locomotive) and Pantograph 174 (carriage). If you take a quick look at this image you could be forgiven that it is actually 2016 as the tram carries the ABC Weekend Television advertising which it saw return following its Heritage Lottery Funded restoration in the 21st century. Fully illuminated the tram can be seen at Rigby Road Depot before another evening of tour duty. Today the tram is the flagship of the illuminated feature cars and more often than not runs the first tour each evening from Pleasure Beach. 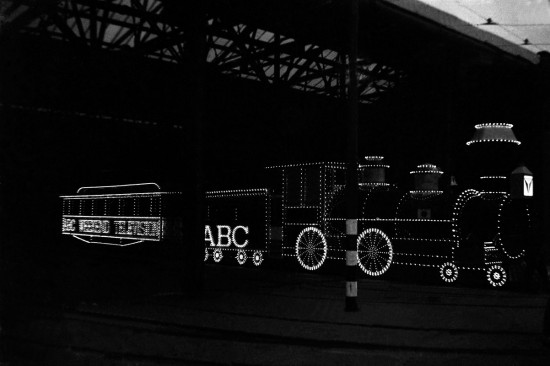