Posted on Wednesday 21 September 2016 by Gareth Prior

We often report on trams being withdrawn from service but rarely do we run a story on when horses are retired from active duty – until now! Recently two of the trammers who are the key to the success of the Douglas Bay Horse Tramway have been retired to the Isle of Man Home of Rest for Old Horses – John and Fletcher have both made the trip across from Summer Hill Stables where they will now have a relaxing life without having to worry about keeping to timetable anymore.

John has been a long standing trammer but having reached 20 the decision was made to give him a well earned retirement where he will meet up with many of his old friends who have previously been retired from hauling the horse trams. John has been joined by Fletcher who, although not that old, never really took to being a trammer and the decision was made to send him off to the home as well where he will be able to relax until his heart is content.

Whilst two horses have now left the stables the local media are still looking at the recent news that Douglas Borough Council are selling Summer Hill stables for a “development opportunity” with vacant possession apparently available from early 2017. Whilst understandable that the Council are looking to sell this asset – and from an operational point of view you can see the advantage of moving the horses down to Derby Castle – it is regrettable that this very historic building is considered suitable for redevelopment (it should be remembered that the stables were originally opened in 1877 and have remained in use throughout the period since). The Isle of Man Examiner have recently run a story on the sale (written by a member of campaign group Friends of the Douglas Bay Horse Tramway) which can now be read on their website at http://www.iomtoday.co.im/news/isle-of-man-news/buildings-at-risk-tram-horse-stables-must-remain-a-genuine-working-environment-1-8129833. If the worst does happen don’t forget that tours of the stables are run each weekend.

As the Douglas Bay Horse Tramway itself the service continues to run – by this time in recent years it has been season over by now but an extended season is this year in operation – although the enhanced timetable of the summer months is no longer in use but you can still see two trams running at a time for most of the week. Of the trams sold at auction last month only two have so far left for pastures new (33 and 34) but Winter Saloon 28 has recently been reported as having been moved around the depot with its departure imminent. 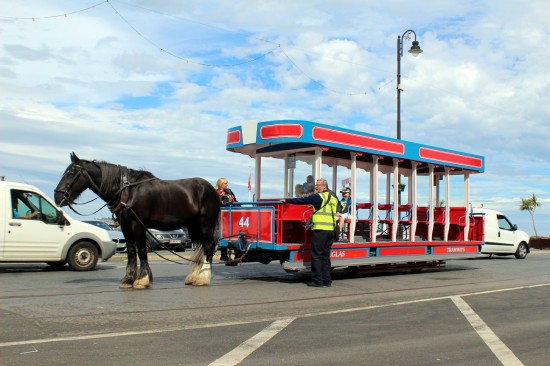 John is seen here with Royal Tram 44 at the Sea Terminal on 6th August. (Photograph by Gareth Prior)