Posted on Sunday 8 February 2015 by Gareth Prior

Today our Picture in Time goes back to 1992 as we take a look at Queen’s Road Depot on Manchester Metrolink – before the network had welcomed its first fare paying passengers.

This view shows at least nine T68s stabled at the depot on 23rd February 1992 with 1014 on its own on the left hand side. Also easily visible are 1003 and 1001 in the next row and 1013 behind 1003 on the far side. At this stage testing of the initial line was well underway (it was less than two months until the first sections opened to the public) but no-one knew whether the return of trams to the streets of the UK would be a success. But know in 2015 we can probably say that the opening of Manchester Metrolink was good for the city and the area as a whole with the network having developed beyond all recognition in the intervening years including a major expansion. 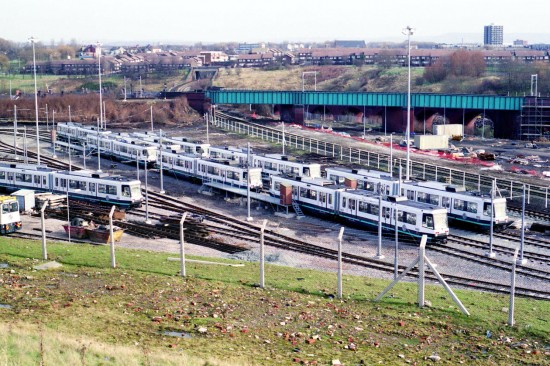