Posted on Saturday 25 March 2017 by Gareth Prior

Whilst most of the attention in UK tram preservation in 2017 has been directed towards Blackpool trams or trams to be restored in Blackpool one of the most ambitious projects in recent years has come to a conclusion with Burton & Ashby Light Railway 14 carrying passengers in the UK for the first time in 90 years. 14 was used for the first time in public service at the Statfold Barn Railway in Staffordshire during one of their operating days on Saturday 25th March – and proved to be a very popular addition to the various railways operating on the day.

14 was one of 20 open top trams built by Brush of Loughborough in 1906 for Burton and Ashby Light Railways to run on their 10 mile line. Unique in being the only tramway – although officially a light railway as it was built under light railway legislation – to be owned and operated by the Midland Railway the network opened on 13th June 1906 with a main line running between Burton and Ashby with a branch to Gresley. Built to the 3’6” gauge the tramway passed to the London, Midland and Scottish Railway (LMS) in 1923 as part of the grouping of the country’s railways. However just four years later the decision was taken to close the line as a result of ongoing competition from buses with the last trams running on 19th February 1927. Whilst ten of the cars were sold to Tynemouth and District, 14 was sold locally and saw use as a shed/greenhouse until the 1970s when it was rescued and was restored by local enthusiasts. It was then sold to Detroit in 1980 and made the trip across to America where it was to see use on their heritage line for many years. With this line closing 2003, 14 became surplus to requirements and after languishing in a warehouse for many years it was put up for auction in late 2014. The successful bid was made from the UK and 14 returned to the country in early 2015.

Its new home was the Statfold Barn Railway, a well known private railway which has restored many locomotives over the years but a tram was a significant departure. The decision was made that 14 would be restored to operational condition, albeit with batteries fitted to allow it to operate without the need for overhead wires to be erected. The restoration progressed significantly during 2016 and it was reported at the time that it was planned that it would enter service during 2017 following the construction of its own depot and a 3′ gauge line was installed (with the tram having been regauged in the USA).

With the work fully completed in the early part of 2017 the first public operating day of the year at Statfold Barn Railway on Saturday 25th March saw 14 – in a gleaming coat of Maroon and Cream – enter service. This was the first time in at least 14 years that 14 had carried passengers and the first time in 90 years that passengers had ridden on the tram in the UK. For the restoration – and conversion to battery operation – to have been undertaken in a relatively short timeframe is surely one of the more remarkable achievements for tram preservation in UK in recent years.

* Public opening days at Statfold Barn are strictly by pre-requested invitation only and that it isn’t possible to turn up on the day. Further public days are due on Saturday 10th June and Saturday 9th September and there is also a Great Miniature Weekend on Saturday 6th and Sunday 7th May. More details on how to visit the railway are available on their website at http://www.statfoldbarnrailway.co.uk/. 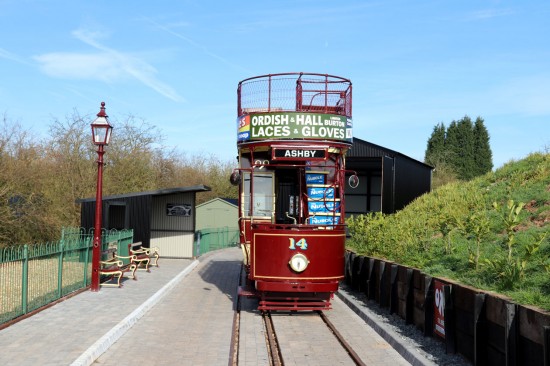 14 waits for its first public services outside its new depot. 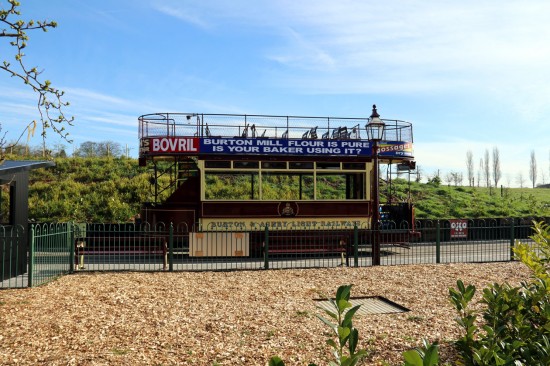 Another view of 14 ahead of its first service. 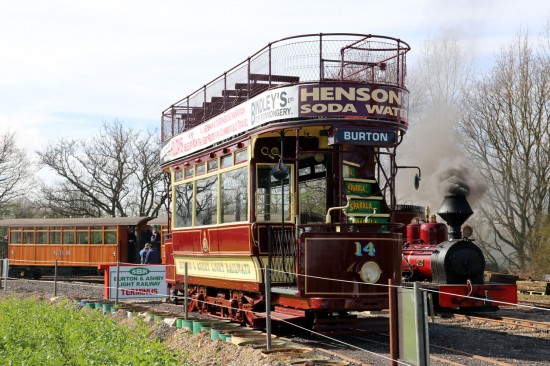 This view is at the other end of the line, Oak Tree Halt. Alongside is steam locomotive Fiji which was restored to working order in 2014. 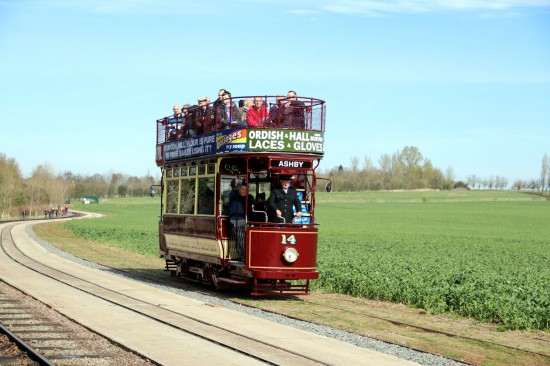 14 heads along the line towards Oak Tree Halt. Graham Lee, the owner of Statfold Barn is alongside the driver. (All Photographs by Kevin James)