Posted on Sunday 14 November 2021 by Gareth Prior

Two more Photo Galleries have been added to the site this week, photos coming from Dublin and Blackpool’s Tramtown (Rigby Road Depot):

* Apologies but there are a few techinical problems this week which have caused problems with the upload of the website. I think everything has now loaded but if there is anything which doesn’t appear to be right please let me know (it took the homepage about 5 attempts and 15 minutes to appear!), a nice relaxing start to another Sunday! 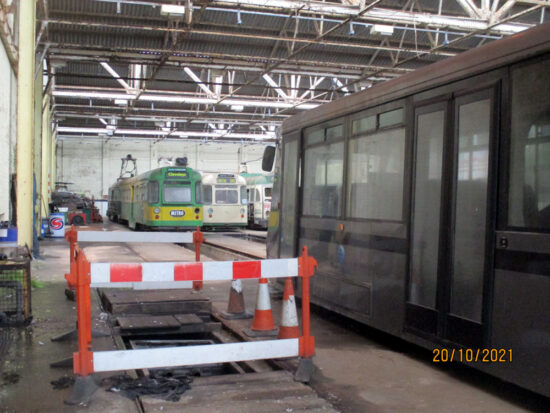 It’s the newest tram attraction in the country – Tramtown was officially launched at the end of September and is now seeing weekly tours given around Blackpool’s Rigby Road Depot. These allow the chance to see trams which have been long withdrawn and are now stored in the depot as well as to see what is currently in the Workshops. In this view we look deep into the depot with the Trampower prototype on the right and then a couple of Twin Cars – orphaned Trailer 681 and 272+T2 at the back with Brush 625 also just visible. This was taken during the tour on 20th October 2021. (Photograph by Stuart Cooke)