Posted on Monday 13 October 2014 by Gareth Prior

Transport for Greater Manchester have confirmed that the Manchester Metrolink Airport extension will open to the public from Monday 3rd November – more than 12 months ahead of schedule (as they are very keen to point out!) Ahead of the public opening full shadow running will commence from Monday 20th October.

Services will initially run every 12 minutes between the Airport and Cornbrook although it is planned that once the Second City Crossing is completed the services will be able to be extended into Manchester City Centre (Victoria). As a result of the opening of the line some other lines first and last tram times are due to change from Monday 20th October but the details of these have yet to be announced.

Cllr Andrew Fender, Chair of the TfGM Committee, said: “Seeing our trams reach Manchester Airport more than a year ahead of schedule is a truly amazing achievement – and a game-changer for the communities set to benefit from its 15 new stops and frequent, fully accessible services. For Wythenshawe in particular, Metrolink will provide new and easier ways for people across Greater Manchester to reach the town centre and all it has to offer – as well as making it a more attractive place to live, work and do business. The arrival of the new town centre interchange next year will, of course, make it even easier still. For people already living along the line, it will provide new ways of getting to work, leisure, health and education opportunities. Because of that, it’s going to be a catalyst for great change and growth, and I am truly delighted we’ve been able to start that process so much earlier than we expected when we first started this very ambitious and challenging project.”

As from 3rd November the Metrolink network will be 57.5 miles (92.5km) long and will serve 92 stops with the next section of line due to open after this being the first section of the Second City Crossing. 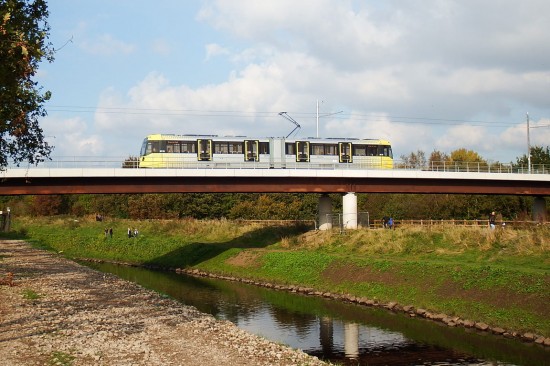 3078 crosses the Mersey Viaduct on 12th October during Driver Training. 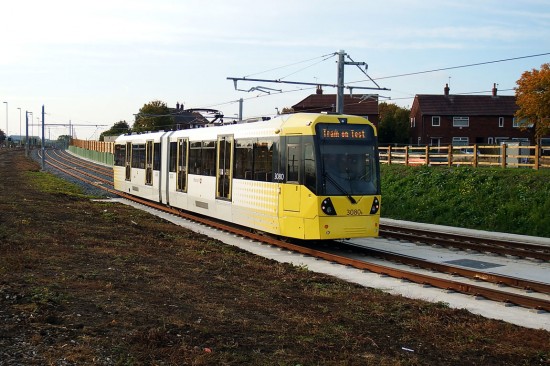 Also on 12th October 3080 on Driver Training ahead of the opening of the line on 3rd November. (Both Photos: Steve Kemp)