On Sunday 12th October, the National Tramway Museum staged an ‘extra’ event which was arranged at short notice to capitalise on the large variety of Blackpool trams currently at the museum. This was intended to mark a number of occasions, most significantly the 80th anniversary of visiting Blackpool Balloon car 711 and was primarily intended as an opportunity to ride on the many Blackpool trams at Crich, although there were also a number of tram line-ups to add to the occasion and hopefully provide plenty to interest all fans of Blackpool’s heritage trams.

The day started well with an impressive line-up of the nine Blackpool cars which would be in service for the day, headed by the star of the show, Balloon 711. The trams all made their way from the depot yard to Cliffside and were then lined up near the car park before proceeding down the street ready to enter passenger service. Such a long line of Blackpool trams made for an impressive spectacle although the unusual combination of bright sunshine and fog made photography a little challenging! As normal, the first service departure of the day from Town End set off at 1030 and this was performed by open cars Blackpool 166 and Blackpool & Fleetwood ‘Rack’ 2. The tram service was initially operated solely by Blackpool single deckers, the others being Blackpoool & Fleetwood ‘Box’ 40, ‘Pantograph’ car 167, Open Boat 236 and Brush Railcoach 630. The three double deckers which had featured in the morning parade were hastily returned to the depot yard, with 711 reversing at Town End whilst Standard 40 and Jubilee car 762 ran in from the back of the line-up using the depot crossover. These trams were then posed in the depot yard along with Standard 49, a tram which last operated in 1992 and is rarely seen out of the depots these days. This was the first of three themed line-ups to take place during the day, the theme of this one of course being the double-deckers. Of note the Croydon works vehicles had been moved out of the way to allow these line-ups to take place, with 49 occupying their normal position on the siding in the centre of the yard.

Soon the first depot fan line-up was dissolved allowing nine Blackpool tramcars to operate simultaneously, leaving 49 all alone, and as the fog cleared the conditions became much better suited to photography. This number soon increased with the Blackpool electric locomotive appearing on the main line with cab rides being offered to a small number of visitors. Further novelty value came with the modern tower wagon TW4 coming out to allow some remedial attention to the overhead near the depot gates. After midday, attention turned to lunch breaks for the tram crews and this allowed two further line-ups to be created whilst the various cars were taken out of service. The first of these was to feature trams that had formerly served the Fleetwood Tramroad route, with 167 being the first to come out of service – providing a brief unplanned but very welcome chance to photograph this car next to Standard 49, before the latter was moved across the depot yard out of the way. This was then joined by Rack 2, Box 40 and Brush 630 although not all went exactly to plan as it was around this time that 762 pulled out its favourite party trick and failed at Glory Mine. The electric loco was duly sent to recover the disgraced Jubilee car, although in the end it was able to limp back to the workshop under its own power. All of this combined with 711‘s crew taking their break (the tram was stabled on the spare track at Town End for the duration) combined to mess up the tram service although the traffic team did their best to keep things moving as much as was possible under the circumstances.

Somewhat later than planned, the third and final depot fan line-up was set up featuring ‘the seaside fleet’. For this, Rack 2 remained in position and was joined by Toastrack 166 and Boat 236 to showcase the different classes of open tramcar which once operated the town’s famous Circular Tours. This allowed both 167 and 630 to return to service although Box 40‘s reappearance was delayed following a few dewirements, resulting in its trolley requiring some attention. There was also a short birthday celebration for 711 outside the Red Lion featuring a cake and this certainly seemed to capture the imagination of some of the younger visitors present. Once the seaside line-up was over the trio of open cars also re-entered service although 236‘s day was cut short after the car suffered another dewirement, this time as it was using the Town End trolley reverser. As a result the passengers were told to alight and the car returned to the workshop to check for damage. On a brighter note, 762 came back into service fighting fit and was able to stay out for the rest of the afternoon, with a fitter riding around on it just in case! Berlin 223 006-4 also came out to carry a disabled visitor, this being the only non-Blackpool tram to carry passengers at all.

As the afternoon wore on attention was turned to the pair of former Fleetwood Tramroad cars, both of which were due to be retired after the event – Rack 2 to await its turn in the queue for workshop attention and Box 40 making its final outing before heading back to Blackpool. In a very welcome move, the final runs of these two cars were staggered so that enthusiasts could ride on both, with Rack 2 setting off from Town End at 1600 and then after its return, Box 40 departed at around 1630. Despite some concerns that car 2′s lifeguard was catching on the stone setts in the street both trams completed these journeys without incident, and it was then left to 711 to perform the final passenger run of the day, bringing a highly enjoyable event to an end. However, there was one last surprise in store as, on arrival at Town End, 711 met up with 762 and the two modernised trams were briefly posed side by side in the street much to the appreciation of those who stayed late enough to see it – the icing on the cake of a great day out.

The Blackpool tram running day at Crich certainly had its faults – the placement of a modern van in the depot yard attracted some criticism as it was hard to avoid including it in photographs of the various line-ups, and the tram service during the middle of the day was certainly a low point – but the goal of organising a fairly low key and low budget event that would be enjoyed by enthusiasts was certainly achieved. Never before have so many trams from the same town operated together simultaneously at one museum in the UK, and with cars 40 and 711 expected to return to the Fylde coast imminently, this feat is unlikely to be repeated anytime soon, making for a very special and memorable occasion. 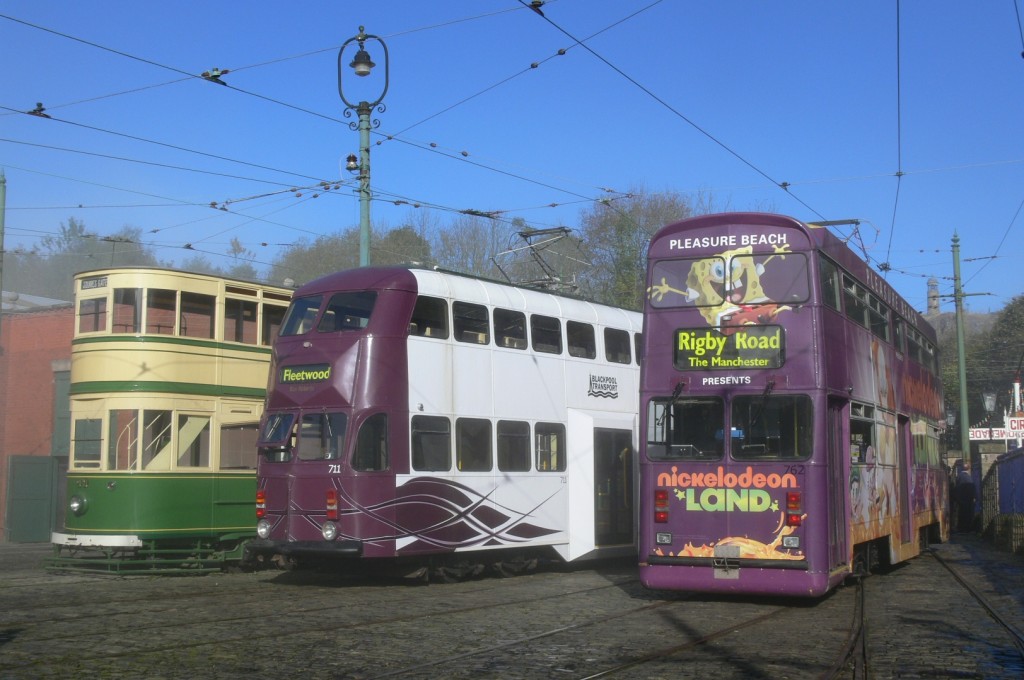 Birthday tram 711 is seen sandwiched between Standard 49 and Jubilee car 762 on the depot fan early in the day, highlighting the rather bizarre mix of fog and sunshine that greeted the morning! 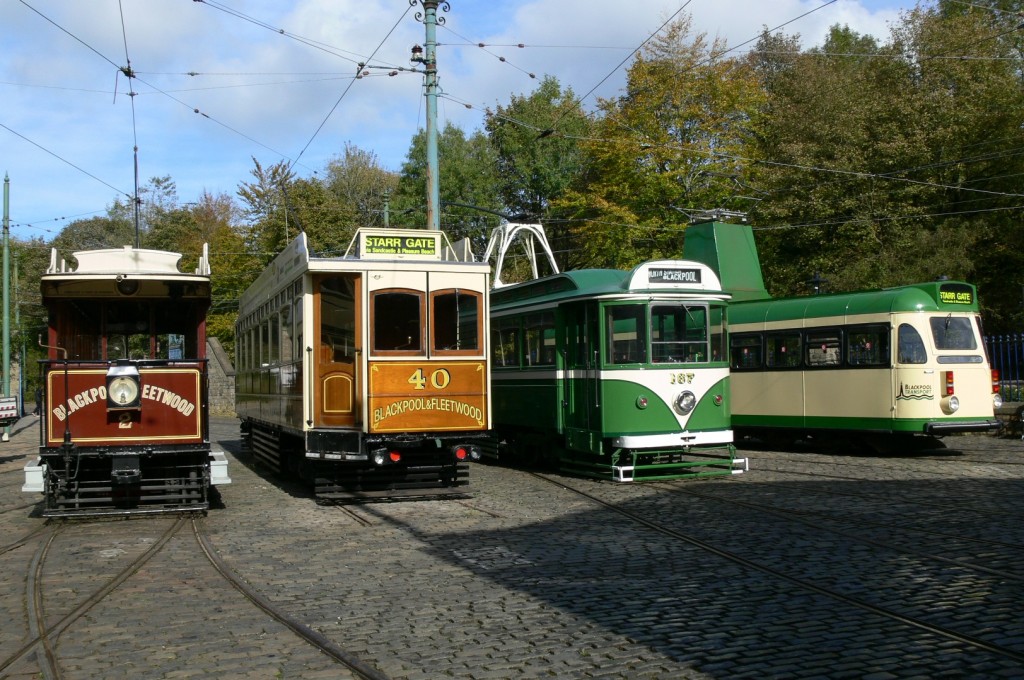 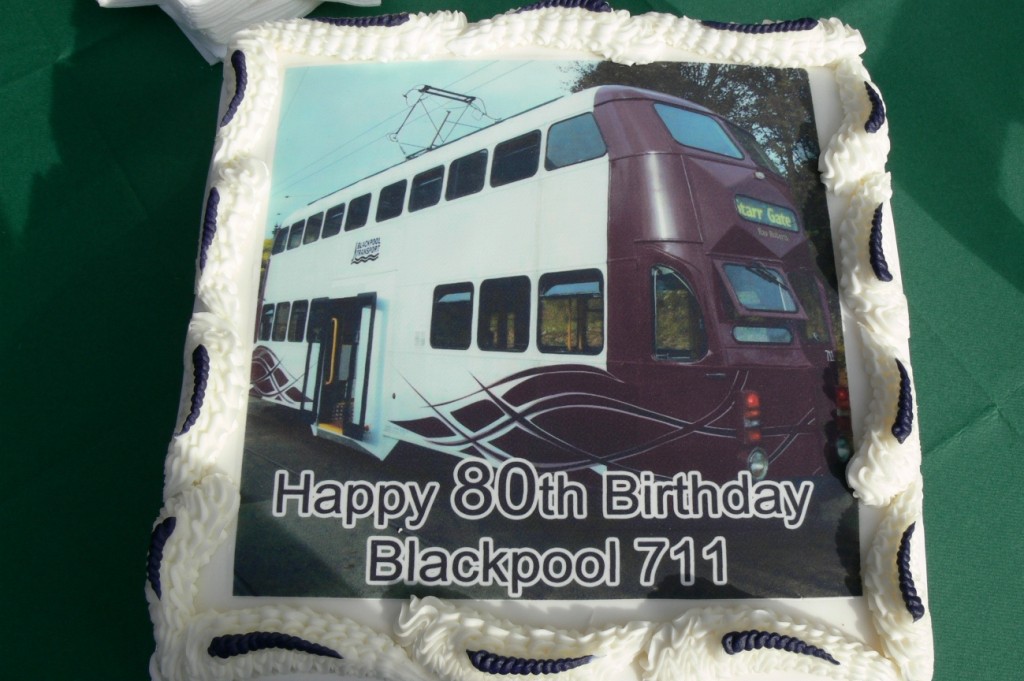 No birthday celebration would be complete without a cake, and so here it is - the special cake produced to mark 711's 80th birthday, which was consumed by visitors and staff in short order! (Photos x 3 by Andrew Waddington)

This entry was posted in Crich Tramway Village, Feature Articles. Bookmark the permalink.