Southampton 45 was placed on a Scott’s Heavy Haulage low loader during the afternoon of Friday 28th June, in preparation for a short visit to the town of Kimberley the following day. As reported previously, the tram will be attending an event celebrating the 100th anniversary of the Nottinghamshire & Derbyshire tramway, due to its similarity to the trams that once operated on that system. The car will be displayed prominently in the Sainsbury’s car park at Kimberley all day on Saturday 29th June, before heading back home.

Better known as the ‘Ripley Rattlers’ system, and known for its less than perfect riding qualities, no vehicles from the Notts & Derby tramway survive today and so a fairly similar four-wheel open top tram was chosen to appear at the centenary event. The Tramway Museum Society kindly agreed to lend out Southampton 45 to mark this historic occasion, and the tram was loaded up – in torrential rain – in the depot yard in readiness for its starring role. 45 only required minimal preparation for its road trip, with the usual attention to the lifeguards whilst its trolley pole was tied down for security.

The car will be displayed prominently in the Sainsbury’s car park at Kimberley all day on Saturday 29th June, where it will be joined by some other displays and a traditional food market. The car is then expected to return home, and will presumably be returned to the Great Exhibition Hall as it is not currently part of the operating fleet at Crich.

It is pleasing to see the Tramway Museum Society are taking part in more tram loans recently; this being the third of 2013, following on from Glasgow 1068 (to Beamish Museum) and Chesterfield 8 (to the Chesterfield Arts Festival). It will also be the first time that Southampton 45 has ever been away from Crich since it arrived at the museum over fifty years ago! 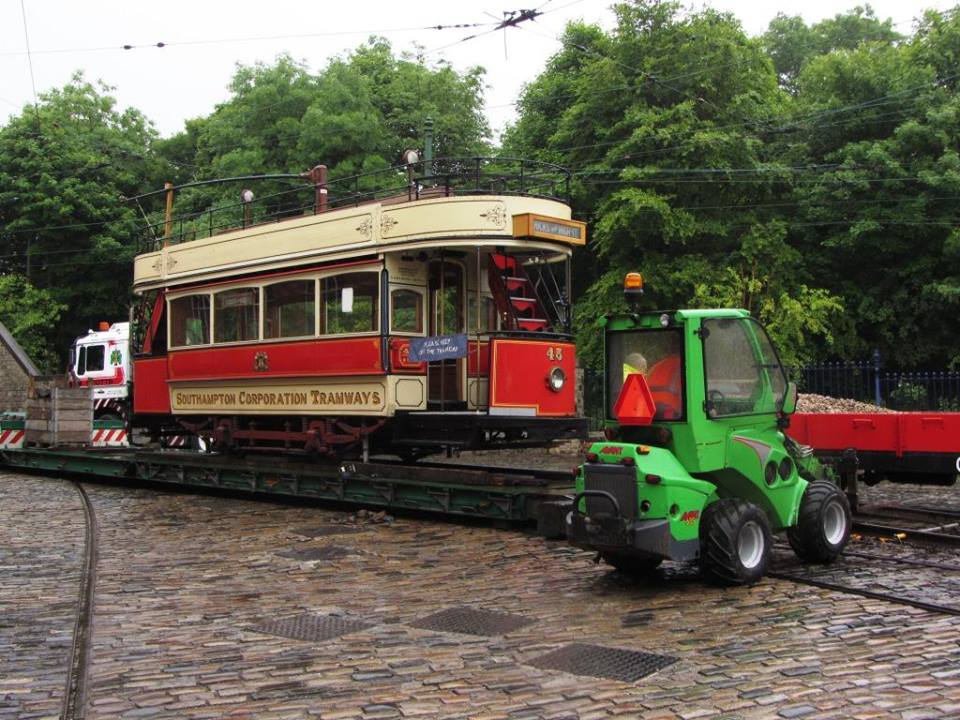 An unusual view of Southampton 45 aboard the low loader that will take it to Kimberley for static display on 30th June. (Photo courtesy of Crich Tramway Village)