Posted on Tuesday 23 November 2021 by Gareth Prior

We mentioned in passing last week that Edinburgh Trams 275 had lost its advertising vinyls for Scotland Rugby and we now show you the pictures! Not only has the tram lost its adverts but it has also lost a lot of the livery detail so it now has a pretty ghostly white look along the sides with just the cab sections still having some of the lining still in place.

This is the first time that 275 has been without adverts since October 2017 when it received its first ad for CR Smith. This was carried until May 2019 at which point new designs for EE 5G were applied and then in July 2019 it because the Scotland Rugby tram but now in November 2021 and it is without adverts once more.

Its not known for how long the tram will have this very plain livery for. 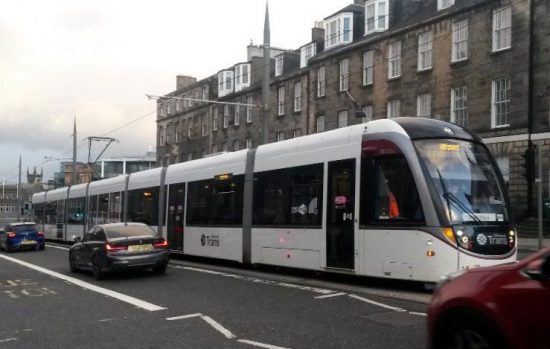 275 in its plain white livery at York Place as it waits to depart for the Airport. (Photograph by John Hampton)