Posted on Friday 9 October 2020 by Gareth Prior

For a system which had really embraced adverts over the past couple of years – including at one stage all 27 trams having some form of external advertising – 2020 has been a far more barren year for new ads (for fairly obvious reasons) but October has seen only the second new advert revealed with 255 carrying ads for Forever Edinburgh.

Forever Edinburgh is a 12 month campaign which was started earlier in the year by the marketing department at the City of Edinburgh Council to emphasise that the city was open again. Unfortunately, at around the time this advert was first seen in service the Scottish government had announced that there would be a temporary further closure of pubs and restaurants in the central belt (which includes Edinburgh) – and this advert includes images of pubs and restaurants! That’s the trouble with pre-planned advertising campaigns – we’re not sure how successful the Go North Wales advert on Manchester Metrolink has been either considering it was first seen in March!

It may have been nine months since we last saw a new advert in Edinburgh but we’re still used to the advert style – full height ads on the third and fifth sections of the tram with the other sections just having roof heigh adverts. The full height ads include images of pubs and restaurants you can visit in the area.

This is 255’s second advert and follows on from a C R Smith advert which was carried between October 2017 and March 2020. 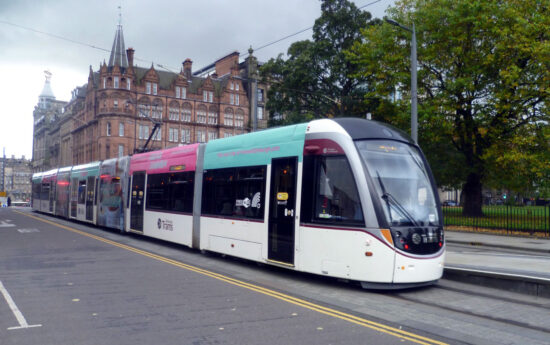 The new look for 255 is seen here at St Andrew Square. It is just departing for the Airport with the garden in the middle of the square just visible to the right. The building in the centre is the former Prudential Assurance offices designed by Alfred Waterhouse & Son, 1892-5 and constructed of pink Dumfriesshire stone. 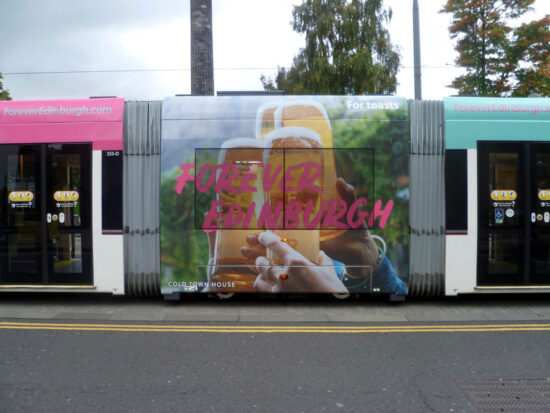 One of the full height adverts on the tram. This is advertising Cold Town House which is a bar, restaurant and microbrewery in a former church in the Old Town, beneath the Castle. 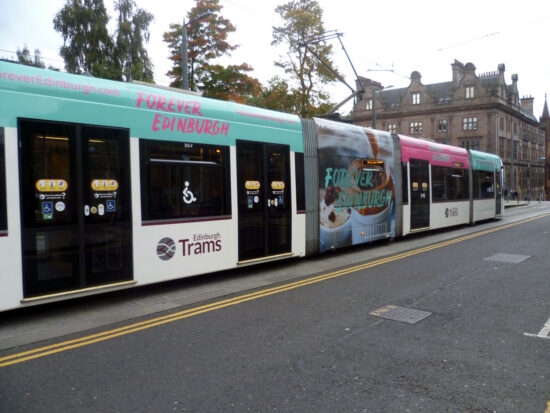 Another view of the tram. This full height advert highlights the city’s restaurants and the wording Grazing to Mark Greenaway refers to the restaurant of that name at the Waldorf Astoria Edinburgh – The Caledonian at the west end of Princes Street. (All Photographs by Roy Calderwood, 8th October 2020)