Around the World in Trams: Innsbruck 65

We continue our look at the trams in Innsbruck today but head back a further 51 years to 1964.

Electric trams in the Austrian city of Innsbruck can be traced back to July 1905 when the first route opened and this next set of photos were taken some 59 years later in the July of 1964 by which time the network was being run by the IVB who were, at the time, starting to modernise the tram system although 1964 did see a stretch of track along Leopold Street to Wiltener Place lifted.

The below photo shows IVB no. 65 at Berg Isel. This is one of the “grossraumwagen” bogie cars built in 1960 by Vienna Lohner to a West German design under licence from Duewag (Dusseldorfer Waggonfabrik). These trams were very common throughout Germany and there were also many articulated versions in circulation as well. 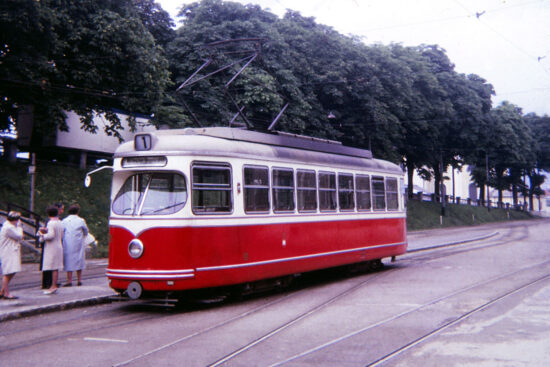